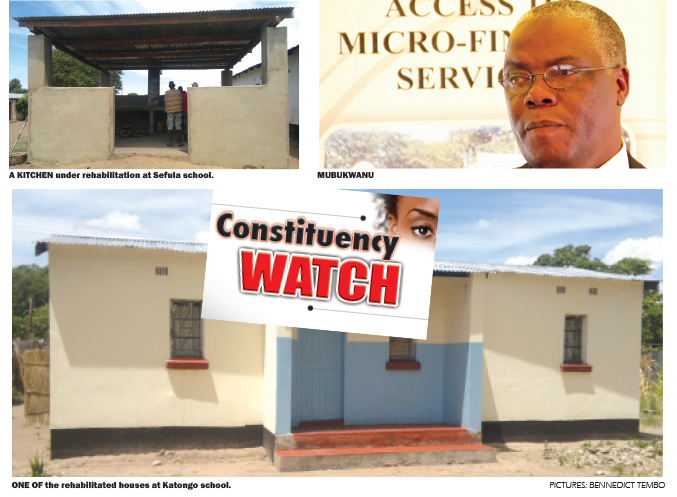 CONSTITUENCY WATCH BENEDICT TEMBO, Mongu
MONGU Central constituency is undergoing phenomenal growth â€“ literally â€“ befitting its status as the nerve centre of the district.
All roads are tarred with elaborate drainages to deal with floods during the rainy season.
The town also has traffic lights.
Traffic lights are positioned at Total filling station at the Monguâ€“Lusaka junction and at OK restaurant in town.
All major roads in town have street lights.
And with a shopping mall adjacent to the townâ€™s only roundabout popping up, the face of Mongu will continue to change for the better.
That is not all.
Infrastructural development funded from the 2013 Constituency Development Fund worth K1, 300,000 has been earmarked for hospitals, schools and markets.
Most of the projects are 90 percent complete.
Mongu Central constituency administrative assistant Hilary Kabila said there has been unprecedented infrastructural development in the area in the last seven years.
In Imwiko ward, Kanyonyo and Mongu Primary schools have been turned into secondary schools.
In the same ward, a school – Tungi Primary School â€“ has been constructed at K75,000 while in Katongo ward, five teachersâ€™ houses have been rehabilitated at a cost of K40,000.
A kitchen and one classroom block have been refurbished at Sefula school for the blind, which also had bunker beds purchased for K75,000. Tapo Primary School is being rehabilitated at a cost of K40,000 while Kasima Primary School, which had its roofs blown off, is being roofed again at K5,000.
Government is building a new district hospital near the recently filled old cemetery almost opposite Shoprite, while at Lewanika hospital, a waiting room has been constructed for K90,000.
A maternity wing is being constructed at Winela clinic as well as the installation of a mortuary unit in Sefula.
A maternity wing is being constructed at Namushakende clinic for K130,000 while a mortuary unit worth K65,000 has been completed.
Two submersible pumps have been installed along with 4 x 10,000 litres tanks to improve water reticulation at Ilute in Kambule ward at K150,000.
A shelter is being built at Imwiko market to facilitate conducive trading at K200,000.
To ensure justice is not denied, a local court is being built in Mabumbu ward at K40,000.
Ms Kabila said CDF in Mongu Central is properly being utilised to uplift the standards of living among the people.
And for other projects, some are still under construction and have reached 75 percent.
Mr Mubukwanuâ€™s interest is to construct permanent structures because they stand the test of time. Schools and classroom blocks have been constructed and are already in use in Lulambo and Mutalaiti, all in Kama ward.
Mr Mubukwanu is also Southern Province minister.
Among the big projects, which are almost done, is the installation of mortuaries in Namushekende and Sefula.
â€œThese places never had mortuaries and this has excited the residents,â€ Ms Lutangu said.
Besides infrastructure development, part of the CDF goes towards the payment of bursaries for 200 pupils in various schools around the constituency.
â€œIt may also interest you to know that education support programme is an initiative of the MP (Member of Parliament), honourable Nathaniel Mubukwanu. This project is currently helping over 200 vulnerable children in paying school fees and examination fees for the pupils. So far about 500 pupils have benefited from the project since it was launched three years ago. This programme only targets pupils from grade 8 to 12,â€ Ms Lutangu said.
Mr Mubukwanuâ€™s desire is for the programme to run as long as he is in office.
She said K80,000 is always set aside for the same project from CDF.
â€œFor CDF 2014 the amount will increase due to popular demand,â€ she said.
Mongu Central constituency has five secondary schools, namely Sefula High School, Namushakende High School, Holy Cross Girls Secondary School, Kambule High School and St Johns Secondary, which all benefit from education support programme as well as over 12 primary schools
â€œWe are seeing big mansions coming up, but we do not know who is building them,â€ Stanley Simwaka, a Mongu resident, said.
Mr Simwaka said the impending construction of King Lewanika University will bring economic life to Namushakende, a largely agricultural area south of Mongu.
There is also activity around new stadiumâ€™s site as people who expect to benefit from its construction are readying themselves by putting up structures.
Mr Simwaka said the Mongu Municipal Council still has a lot of land for development.
â€œMongu as a town, the way I see it, is growing,â€ town clerk Mwiya Mwiya said.
Mr Mwiya said with the construction of the shopping mall, the face of Mongu will change.

Kangaroo Mother Care: for premature, low weight babies
A ride on a minibus