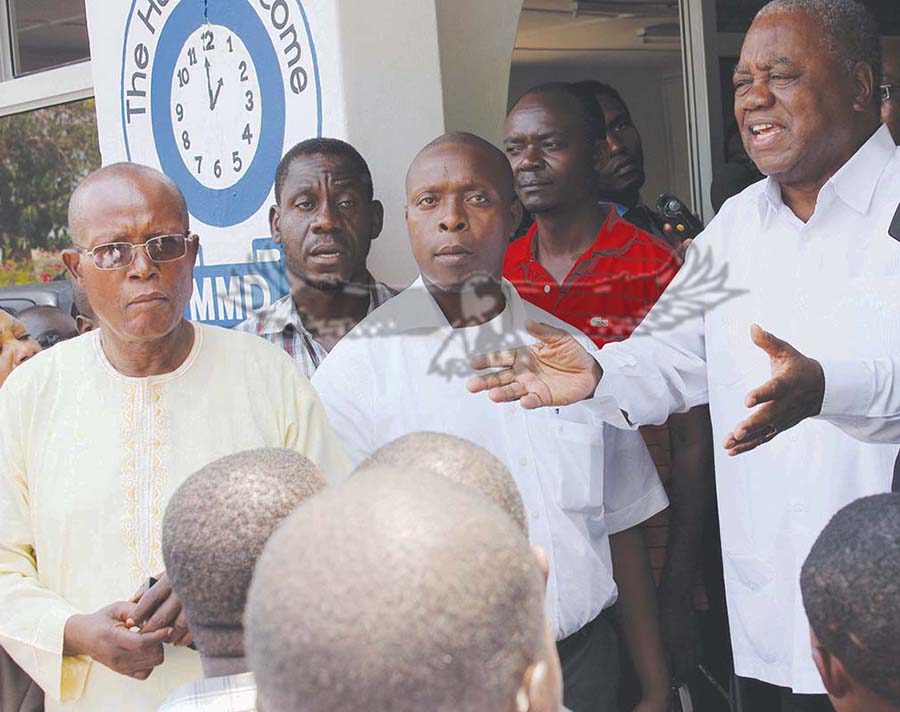 STEVEN MVULA, Lusaka
THE MMD national executive committee (NEC) has resolved to field former President Rupiah Banda as its presidential candidate and maintain Dr Nevers Mumba as party leader.
Mr Banda and impeccable sources revealed yesterday that the position of NEC is to field him in the presidential election but to maintain Dr Mumba as party president.
â€œOut of the 23 MPs that voted here on Sunday, 19 voted for RB. And when the National Executive Committee (NEC) sat, the majority were for RB. If I am lying, let the NEC members say so,â€ Mr Banda said as the crowd at the party secretariat burst into cheers and songs of jubilation.
â€œNevers wanted to come to my place and discuss but I told him that I would rather come here at the offices but up to now, he is not here. I will wait for him,â€ Mr Banda said.
He said there is little time left to campaign and so there is need for the party to quickly settle for a candidate.
The former president yesterday waited in vain for Dr Mumba for nearly three hours at the party secretariat so that they could agree on the candidate for the forthcoming presidential election.
Mr Banda arrived at exactly 11:00 hours to a thunderous welcome from cadres and several members of Parliament (MPs) who had gathered as early as 08:00 hours.
Some of the MPs present were Isaac Banda (Lumezi), Kenneth Konga (Chavuma), Situmbeko Musokotwane (Liuwa), Levy Ngoma (Sinda) and Kenneth Chipungu (Rufunsa).
And sources said the decision by NEC to adopt Mr Banda will be reviewed today and an official announcement will be made.
â€œThis is a positive development for MMD. But I can confirm that the position of NEC is that Mr Banda is the presidential candidate and Dr Mumba remains party president,â€ the sources said.
In a telephone interview, Dr Mumba claimed he was not aware that he was supposed to meet Mr Banda at the party secretariat.
â€œI am not aware of that meeting but I know I will meet him,â€ Dr Mumba said.
Meanwhile, MMD national secretary Muhabi Lungu has refuted media reports that the NEC had unanimously adopted Dr Mumba as its candidate.
â€œThe statement that has been issued purporting to be emanating from the MMD secretariat is false, dishonest and is intended to disrupt the direction given by the NEC,â€ Mr Lungu said.
Minister of Information and Broadcasting Services Joseph Katema declined to comment on the consequences of Mr Bandaâ€™s return to active politics.