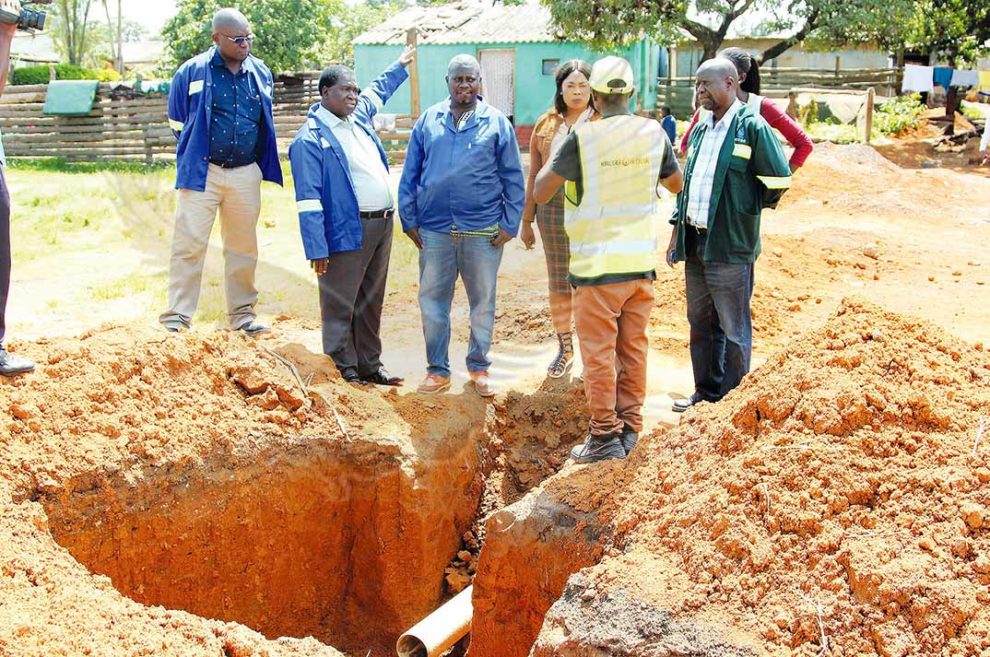 MONICA KAYOMBO, Ndola
WHERE do you start from in such a scenario? Maybe, you should start with the end.

In an ideal scenario, no-one should live in such filthy conditions. But when you see the full picture, you quickly realise this is not an ideal scenario.
The residents of Ndola’s Mine Masala, who are the affected, tell the story better.
That they are even alive to tell the story is perhaps stuff that miracles are made of. You would expect that they would be wiped out by diseases such as cholera because of the unsanitary conditions that they live in.
Yes, they live in filthy. The sewer lines have either been blocked or damaged for over eight years now.
Past efforts to unblock and empty some sewer lines and toilets using the vacuum tanker by the Kafubu Water and Sewerage Company (KWSC), the water utility tasked with providing water and sanitation services to the residents of Ndola, Luanshya and Masaiti, have proved inadequate.
Doris Mwaba, a resident of house number 0011 Mine Masala, is one of those affected.
The situation is so bad for Ms Mwaba that she does not feel at home when she is at her own home.
Eating food from her home is no longer enjoyable, unless she visits friends or relatives who live outside Mine Masala.
Ms Mwaba’s sewer system servicing her home and that of her neighbours has been damaged for some time. The faecal matter, when flushed from the toilets, is spilled outside.
“We clean the faecal matter every hour like you are cleaning the house,” she says. “The pipes are blocked and this problem has been here for years.”
The situation is even worse for Charity Malela.
She resides at house no. 0013 Mine Masala. Unfortunately, her home hosts a stream where the faecal matter from different homes passes through before discharging it in the nearby bush just behind her house.
For Mutinta Sichilima, a resident of house number 232 Main Masala, they have even stopped using their toilets because they are full with human discharge.
If it is during the day, they have to either visit friends or the nearby market to help themselves out.
Mr Sichilima’s wife gave further insight, very bluntly.
“We use chamber pots [sometimes] during the day and in the night. When they are full, we spill the effluent in the furrow right in front of our home,” Mrs Sichilima says.
Thomas Chola, who resides at house number 065 Mine Masala, says the problem of the sewer system has been experienced by a number of residents in the area for many years now, close to a decade in fact.
For Miriam Phiri, another affected resident, her thoughts are with the children.
She says children are carelessly exposed to human waste which they regard as normal.
“Cholera is looming and we need to do something to ensure our children and families are safe,” Ms Phiri says.
Jacqueline Bwalya says even when KWSC sometimes uses the vacuum truck to empty the toilets, work done is equal to zero. Within a limited time, they are again full.
But what is really the problem?
Machiko Noko of house number 0021 suspects that the lack of sewer drainage covers could have led to the continued problem in the area.
He says most manholes do not have covers as they have been stolen or vandalised.
The situation is dire.
Ndola City Council (NCC) town clerk Wisdom Bwalya and Mayor Amon Chisenga visited the affected homes on Wednesday to determine the extent of the problem and see how best it can be resolved.
Mr Bwalya says vandalism and negligence are some of the problems that need to be addressed in the community through sensitisation.
He says members of the community need to be responsible and guard against vandalism and improper use of the sewer system.
Mr Bwalya says the problem has been made worse because the area was designed to house only a small population, which however has become dense with many people relocating there.
KWSC has now moved in to try and work on the situation.
Company managing director Anthanasius Mwaba says Kruger Veola Construction Company has replaced about 2,000 metres of the sewer line for the affected houses in Mine Masala.
This is being done under a Danish International Development Agency (DANIDA) project, which started 18 months ago and is supposed to run for three years.
Mr Bwalya says Kruger Veola Construction Company and KWSC are expected to complete the works in Mine Masala before the end of this month.
“We are only remaining with 600 metres,” he says. “With sewerage, you do not start from the top, you start from the bottom. As you are working, you are also unblocking the sewer system.”
Mr Mwaba says the water utility firm is also lobbying for more money from the central government to assist with other parts of the sewer system that are not catered for in the US$104 million DANIDA project.
KWSC is expected to spend US$2 million in replacing and unblocking the sewer system.
Kruger Veola Construction Company Network supervisor for the Masala project Abraham Simbeye says his company has opted to sub-contract other companies to speed up the works.
The company was compelled to sub-contract after government demanded that the works be expedited in Masala township to avoid the outbreak of cholera or any related diarrhoea diseases.
Ndola district commissioner George Chisulo, who also conducted an-the-spot inspection of the exercise in Masala on Monday, says the government is worried that people have continued staying in unsanitary conditions for a long time.
“The intention of the government is to see to it that the residents of Masala have got a sewer system,” Mr Chisulo says. “The government has sourced US$104 million from DANIDA for this project.”
Mr Chisulo urged the contractor to speed up the works so that there is smooth flow of the waste to the main sewer line.
KWSC acting director of engineering Rabson Ngulube says the company has deployed a vacuum tanker to empty the sewers as a short term measure.