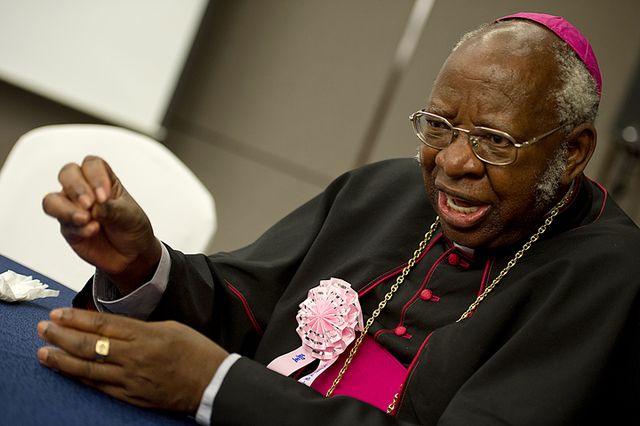 By KABANDA CHULU
EXCOMMUNICATED Roman Catholic Archbishop Emmanuel Milingo has sued Trustees of Zambia Helpers Society, a non-governmental organisation he founded, for allegedly transferring personal properties without his consent and expelling him from the organisation.
Archbishop Milingo wants the Lusaka High Court to declare his dismissal null and void from Zambia Helpers Society.
The clergyman also wants the court to declare that the transfer of his personal property to Zambia Helpers Society was fraudulently done.
According to a statement of claim filed in the Lusaka High Court yesterday, Archbishop Milingo also wants the court to restore him to his position and status in Zambia Helpers Society.
He also wants the court to order that his personal property be restored back into his name.
Archbishop Milingo also wants the court to order the amendment of records at the Registrar of Societies and any other office.
He argues that he founded Helping Hand Society in 1966 but the name was changed to Zambian Helpers Society in 1994.
Archbishop Milingo said when he left for the Vatican in 1983, Zambian Helpers Society continued to perform its objectives until 1994 when he realised that certain aspects of the organisation were not complied with.
â€œThis became necessary for me to appoint a representative and I appointed Sylvester Mubengwe to be both my proxy and delegate Trustee. Mr Mubengwe agreed and was told to address issues that were neglected such as accounts keeping, status of nurses reporting to the Ministry of Health and remittance of annual returns to Registrar of Societies.
â€œWhen I got married in 2002, the Trustees believed that I have left the Society and called a meeting without myself or informing my proxy, at which meeting amendments were made to the Trust Deed without my approval resulting in reduced influence and powers in the society,â€ Archbishop Milingo said.
He explained that since then, other changes have continued to be made to the Trust Deed gradually to reduce his influence and authority.