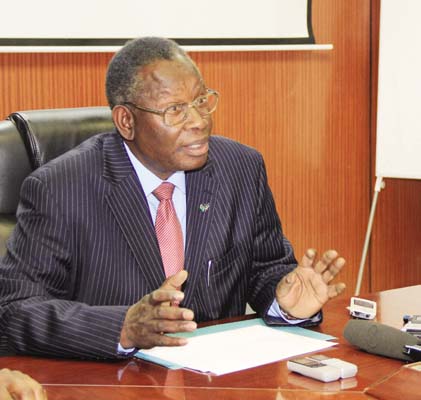 KELVIN MBEWE, Lusaka
FORMER Minister of Health Joseph Kasonde has died. He was 79.

Dr Kasonde died on Friday around 21:30 hours in Lusaka after a long battle with cancer of the liver.
He is survived by his wife, Mary, five children and several grandchildren.
The funeral is being held at Dr Kasonde’s residence in Ibex Hill Extension on Twin Palm Road.
Minister of Health Chitalu Chilufya announced the death of Dr Kasonde in a statement on Friday.
And President Lungu has described Dr Kasonde as a hardworking and extraordinary man.
Special assistant to the President for press and public relations Amos Chanda said in a statement that Dr Kasonde was one of Zambia’s best medical practitioners.
“The President therefore sends his heartfelt condolences to Mrs Kasonde and family on the passing of the great son of Zambia.
“The President wishes the bereaved family God’s grace during the funeral and life without their pillar of the family,” he said.
And President Lungu has said Dr Kasonde’s death is a challenge for those that worked with him and they should learn from his achievements and great sense of patriotism and commitment to duty.
And the Patriotic Front (PF) secretary general Davies Mwila says the party is saddened by the death of one of its senior members.
“The party is grieving to lose such a pillar of wisdom and strength.
“The Patriotic Front is in grief and passes its deepest condolences to the bereaved family,” he said.
Mr Mwila said this in a statement issued by PF media director Sunday Chanda and has described the late Dr Kasonde as an accomplished professional.
And Dr Chilufya has described Dr Kasonde as a maestro of a doctor.
“The health sector has yet again been robbed of an internationally acclaimed practitioner of medicine. He was a maestro of a doctor; my teacher and a teacher of many, a mentor; a doctor who diligently served the world and the nation; and he laid a firm foundation for reforms in the health sector,” he said.
Dr Kasonde graduated with a bachelor degree of medicine and surgery from Aberdeen University in 1966, and got a doctor of medicine degree from Oxford University in 1976.
From 1977 to 1984, Dr Kasonde served as Director of Medical Services, combining this position with that of permanent secretary in the Ministry of Health in Zambia from 1979.
From 1985 to 1998, he worked for the World Health Organization as Responsible Officer for Research Capacity Strengthening in Developing Countries.
Dr Kasonde was nominated Member of Parliament and appointed cabinet minister in 2011 by the then President, Mr Michael Sata, and re-appointed to the same position by President Edgar Lungu and served until 2016.
And the Zambia Medical Association (ZMA) has described Dr Kasonde’s contribution to the medical sector as immeasurable.
ZMA president Abidan Chansa said in a statement that Dr Kasonde’s humility and intelligence should be the yardstick that each medical doctor should strive to attain adding that he served the country very well.