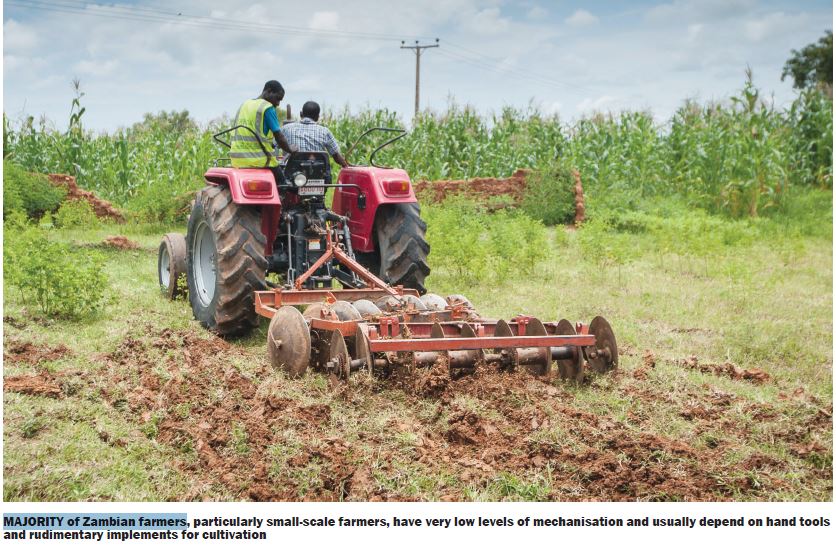 CHRISTOPHER CHIPEMBA, Lusaka
MAUREEN Maimbo is 38 years old and lives in Maimwene Resettlement Scheme in Mumbwa district. One Tuesday morning, she arrived home with K1, 350 cash, her paltry proceeds from the 18 of 50kg bags of maize she had sold to a miller in Mumbwa central town. Mrs Maimbo lost her husband in 2010 and for the last eight years, she has been fending for herself and her three children now aged 8, 12 and 15 through farming. Now this time around, the Maimbo family has to work out a way to survive on this meagre income until the next crop harvest 12 months away.
As Mrs Maimbo sat in the four-room family hut, the words of John Miti, the area agriculture expert and avid campaigner echoed in her mind. Mr Miti as part of the extension services to farmers was talking about the importance of farmers mechanising their farming system and adopting smart agriculture practices to minimise the effects of climate change and increase their yields.
“It is now a must for all farmers to mechanise their farming system, diversify and adopt climate smart practices if they are to have high crop yields because climate change is real. The short rainy seasons we are experiencing, mainly characterised by reduced intensity of moisture, are as a result of climate change.
“So, when farmers mechanise, they will be able to prepare the land early and reach the ideal crop depth to increase the chances of crop survival whenever long dry spells occur.’’ Mr Miti said.
Mrs Maimbo also recalled Mr Miti saying, “Apart from increasing the resilience of crops, mechanisation also improves the efficiency of production and multiplies the crop yields even during stress periods.”
In Mrs Maimbo’s household, farming has never been a rosy undertaking in the past years. In the last farming season, Maimwene community experienced a dry spell which lasted six weeks. Then a continuous downpour of rain followed, causing floods which reduced her maize harvest to 18 bags only.
Despite hearing about the benefits of mechanised farming and the need to adopt climate-smart practices at a community meeting, she had never tried it due to lack of equipment for mechanised farming.
But now for Mrs Maimbo and many other farmers in Mumbwa, who have been lacking access to modern tools for farming for many years, things are bound to change for the better.
Thanks to CAMCO Equipment Limited, a company that has been dealing in agriculture Equipment in Zambia since 1998, for setting aside K1 million for agricultural mechanisation training for staff in the Ministry of Agriculture and farmers too, in the next three years.
During the inaugural training of 34 officers from all the 10 provinces of the Ministry of Agriculture held at Grand Palace Hotel in Lusaka recently, CAMCO group chairperson Li Tie said the equipment that his company supplies can help to boost agricultural production, and therefore support wealth creation and value addition to farm produce.
“CAMCO is operating five branches in five provinces in Zambia, including the headquarters for the southern region. The equipment we are supplying helps and continues to support job, wealth creation and value addition. But jobs can only be created with investment and where the youths have skills. Therefore, CAMCO has set aside K1 million to invest in the next three years in a training programme for agriculture mechanisation,” Mr Li said.
Minister of Agriculture Michael Katambo visited the CAMCO showroom in Chilanga to check the modern farming equipment that is available. He said the Edgar Lungu-led government has priotised agriculture as the backbone of the economy. Mr Katambo noted that agriculture has advanced with a lot of technologies and, so farmers of all categories should mechanise in order to enhance agricultural productivity.
“This government led by his Excellency President Mr Edgar Chagwa Lungu has priotised agriculture as the backbone of the economy for our country. The agriculture sector creates almost 70 percent of employment, especially for our womenfolk.
“So for us, to have a conducted tour at CAMCO has been so gratifying. Agriculture now has advanced with a lot of technologies. And so when we say we want to enhance production and productivity in all categories of farming, our farmers are supposed to have access to this mechanised equipment that CAMCO is offering,” he said.
Mr Katambo was hopeful that farmers would be able to access modern implements of farming through micro-finance companies.
CAMCO’s decision to train farmers and Ministry of Agriculture officials across the country, is in line with President Lungu’s call to stakeholders to help small-scale farmers mechanise agricultural production and also ensure that agricultural diversification takes centre stage so that the agriculture sector becomes the mainstay of the economy of Zambia.
With the advent of climate change and its negative effect on farming, stakeholders in the agriculture sector have been promoting mechanised farming and the use of latest technologies to achieve high crop yields despite the adverse weather conditions.
However, these efforts will yield futile outcomes if small-scale farmers, who contribute the most to the national food basket are left on the fence.
The biggest challenge for most peasants is lack of access to mechanised tools of farming and ignorance of climate smart farming practices.
Therefore, the move by CAMCO Equipment to invest in the training of small-scale farmers and frontline Ministry of Agriculture staff, is one way of equipping farmers to produce high crops yields in unfavourable weather conditions.
As the saying goes “Give a man a fish, you help him for one day, but teach him how to catch fish, you help him for the rest of his life.”
So, given the training by CAMCO, recipient farmers are expected to master the skills for climate-smart agriculture and become more productive.
Though access to modern implements of farming will equip them the more against adverse weather conditions prompted by climate change.