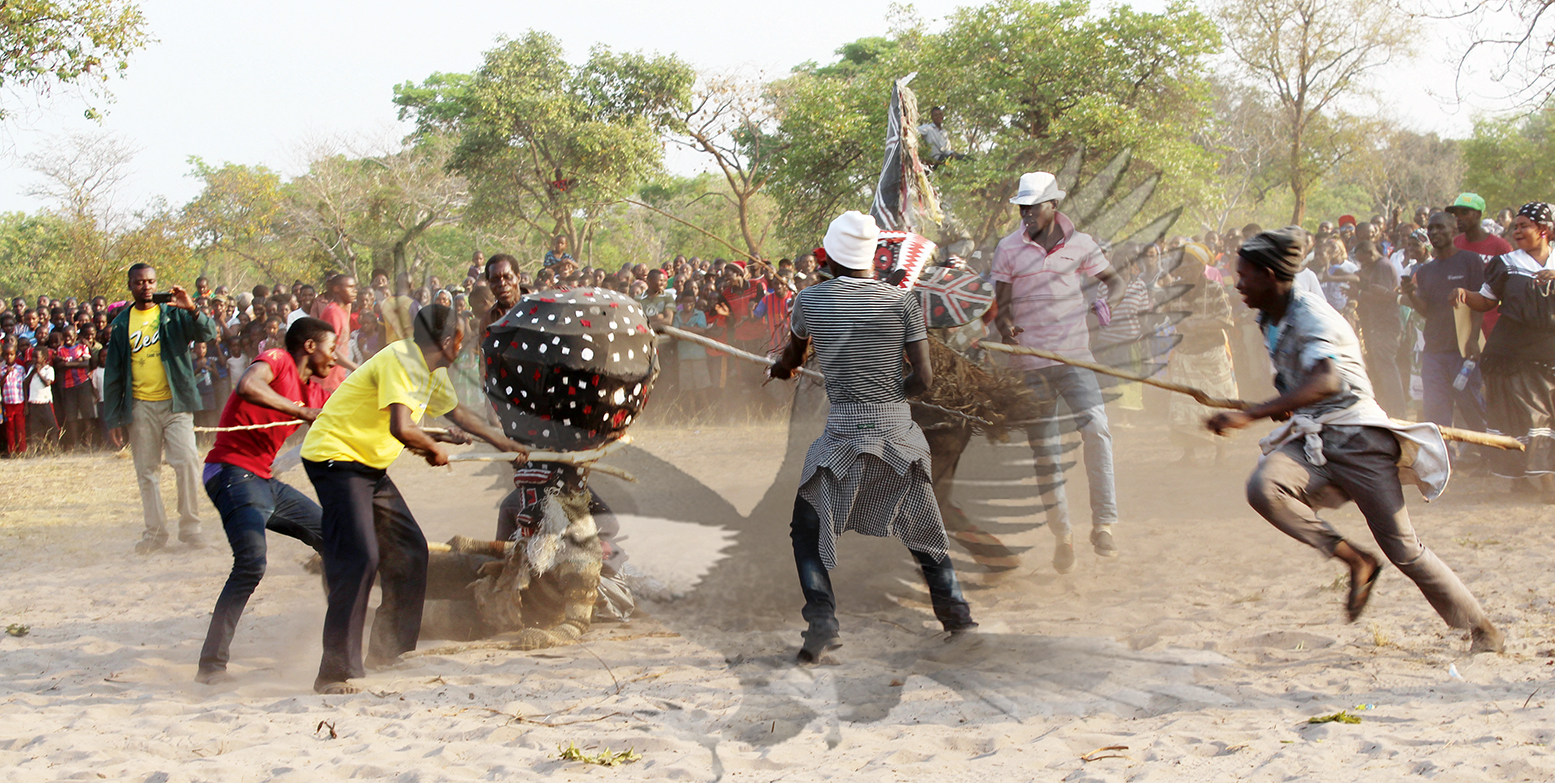 YOUNG men help the likishi known as Mpindola back to its feet using sticks during the Kulithamba celebration: PICTURE: ELIZABETH CHATUVELA

ELIZABETH CHATUVELA, Limulunga
APART from the well-known Kuomboka ceremony, the Western Province has another rich cultural ceremony for the Mbunda people called Cheke Cha Mbunda, which in its literal translation means â€œLight of the Mbundaâ€.
The Mbunda, who are a Bantu group of people, have a very rich cultural heritage through their Makishi masquerade among other traditional and cultural practices.
It is against that background that the Mbunda people hold the Cheke ceremony, which showcases their lifestyle that includes Mukanda, Mwali dance and how they fought with the bow and arrow as they migrated from the North through to Angola before settling in Barotseland or Western Province.
Though the Luvale, Chokwe and Luchazi equally have the Makishi, the Mbunda have the largest number of Makishi with the figure standing at over 50.
This year, the Cheke ceremony was held from September 29 – October 2 at Mushuwa Royal Village in Limulunga and was attended by four Mbunda chiefs from Kaoma, Kalabo, Sikongo as well as the host. The chiefs are the host, Chief Chiyengele Nyumbu III, Chief Kasimba Chikambo, Chief Namulimbwa and Chief Mwene Mundu.
The ceremony starts with the Makishi gathering in Kashembe area on a Wednesday in readiness for their resurfacing from the Kashembe graveyards on Thursday morning. Later, the Makishi commences the procession from Kashembe to Chief Chiyengeleâ€™s palace in Mushuwa Royal Village of Limulunga.
After the procession, the Makishi resurfaces on Saturday morning after the chief and other invited guests have made their way to the arena to mark the climax of the ceremony.
At this point, the Makishi, led by Kanjenjela, conducts a makiti dance from morning to sunset and the same is repeated on the last day of the ceremony, which in this case fell on a Sunday.
However, before the makiti dance, the Makishi, led by Kajenjela, pays homage to Chief Chiyengele and other chiefs, where the leader takes time to introduce each of the Makishi also known as Matotola in Mbunda.
The most interesting part of the ceremony is when the Makishi calls Mpindola to make its way to the main arena to participate in the kulithamba (celebration) dance. The dance, which symbolises the celebration of victory after war or harvest, is performed by the Makishi with young energetic men holding logs, joined by ululating women.
As the celebration is in progress, the Mpindola falls to the ground due to his huge head which seems not to support the body weight, but the young men quickly aid it back with the logs in no time, much to the amusement of the crowd.
The spectacle is repeated several times amid cheers from the crowd.
Apart from the kulithamba, the crowd is also treated to the performance of tundanji, the young initiates of the Mukanda ceremony.
As soon as the boys aged between eight and 13 make their first appearance after the circumcision, drummers start the drums as the lads who were painted in white stripes dance by way of shaking their waist while holding sticks in their right hands.
Mukanda is an initiation ritual for boys, which is practised by the Mbunda.
Usually, the young boys live for three to six months at a bush camp away from their villages after circumcision to be taught practical survival-skills as well as knowledge about nature, religion, social practices and values.
During thisÂ  period, a Makishi masquerade of not less than 50 exclusive Mbunda artifacts is exhibited, and dances involving the pantomime-like artistry are performed as a cultural entertainment to the community, as was the case at this yearâ€™s Cheke ceremony.
This ritual is also practiced by other ethnic groups like the Chokwe, Luvale and the Luchazi.
Another dance that catches the eyes of the crowd especially the men folk, is the Mwali, which is performed by a group of young Mbunda girls who have come of age.
The girls, who are decorated in beards and are topless, perform a special dance taught by the Chilombola (tutor) for15 – 20 minutes.
During the performance, the young girls dance towards the chiefs to receive permission to be allowed to perform the dance. The paying of homage attracts huge sums of money from the chief and other invited guests.
After this is done, the girls dance backwards while facing the chiefs and later entertain the crowd who also come forward to drop money in their plates.
In the day-to-day life, the celebration of the young Mbunda girl who has come of age lasts for several days after which the young woman may be given her own field. She may also have her own choto (cooking fire) and is now considered a true woman, who is ready for marriage.
In a bid to preserve their rich culture, the Mbunda have published a book on the history and cultural life of the Mbunda speaking people. The book was published by the Cheke Cultural Writers Association in 1994.
At the ceremony, Mbunda Royal Establishment spokesperson Kennedy Liale Mubanga disclosed that Professor Biemba Maliti Muna Mwe Litwe has also produced the first ever Mbunda-English dictionary in an attempt to help its people learn the correct Mbunda language.
â€œAbove all, we have opened the first ever radio station operating in the Mbunda and Nkoya languages in Kaoma district whose coverage is expected to reach Mongu and other parts of the Western Province. These are great achievements considering that the Mbunda are the biggest single language group in the province,â€ Mr Mubanga said.

Know your next toll gate