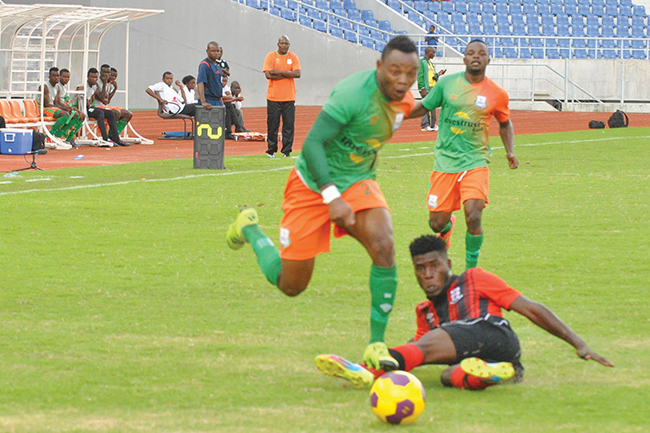 MULWANDA LUPIYA, Ndola
ZESCO United striker Idris Mbombo and three others will miss Saturdayâ€™s Confederation Cup play-off against Nigerian side Enugu Rangers.
Mbombo is suspended after accumulating two yellow cards in the competition.
Others ruled out due to injuries are striker Jackson Mwanza and midfielders Misheck Chaila and Simon Silwimba.
Coach Zlatko Krmpotic confirmed the non-availability of the quartet in an interview in Ndola on Sunday after Zesco beat Nkana 2-0 to lift the Samuel â€˜Zoomâ€™ Ndhlovu Charity Shield.
Mbombo is serving a one-match suspension after accumulating two yellow cards in the competition.
Mbombo scored five goals in the 2016 CAF Champions League as Zesco reached the semi-finals.
â€œI said before that this tournament [Charity Shield] came to us at a very good time. For us, we have three players from the first 11, Jackson, Simon and Chaila, who are injured and also Mbombo will not play because he is suspended.
â€œBut this is football and we need to prepare other players to play in Nigeria. It is a very important game for us in Nigeria,â€ Krmpotic said.
He said Zesco will not look down on Enugu.
â€œThis is a footballing country [Nigeria], Enugu is a good team, champions of Nigeria. We must go there with respect but I think Zesco have a chance to go into the group phase. Every game we go to win but this is football,â€ Krmpotic said.
Mwanza was injured during last Thursdayâ€™s Samuel â€˜Zoomâ€™ Ndhlovu Charity Shield semi-final 4-2 win over Power Dynamos in Kitwe.
Defensive midfielder Misheck Chaila sustained an injury on national team duty while Silwimba limped off in the Confederation Cup first round first leg against Burundian side Le Messager Ngozi.
Meanwhile, the Confederation of African Football has appointed Senegalese referee Issa Sy to officiate the Enugu versus Zesco match, SYLVESTER CHISHIMBA reports.
Sy will be assisted by compatriots Nouha Bangoura and El Hadji Abdul Aziz Gueye while Falou Galasse Kane is the fourth official.
The match is billed for Nnandi Azikiwe Stadium in Enugu while the return leg will be played a week later in Ndola.