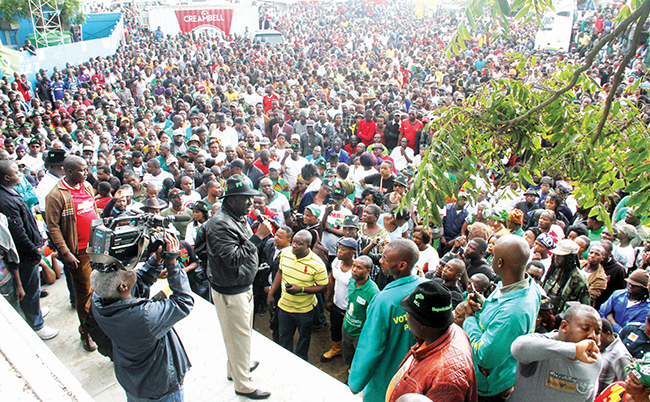 NOMSA NKANA, Lusaka
HUNDREDS of Patriotic Front (PF) members yesterday turned up for a meeting in Matero Constituency in Lusaka to show continued solidarity with the ruling party in the wake of the resignation of their member of Parliament (MP)Â  Miles Sampa.
PF secretary general Davies Chama said the support the party still enjoys in Matero is overwhelming.
Mr Chama also said he has now proved that the people of Matero knew what they were saying when they demanded the resignation of their MP Mr Miles Sampa from the ruling party.
Mr Sampa has resigned from the PF and now heads a hitherto virtually unknown Democratic Front party.
â€œI didnâ€™t know what Mr Sampa was playing at because he held a press conference where he pledged support for President Lungu and also said only death would separate him from PF. But you people knew what he was doing and that is why you demanded his resignation,â€ Mr Chama said.
Mr Chama was speaking at a rally in Matero township, where he addressed hundreds of residents.
In attendance was PF deputy secretary general Mumbi Phiri, Kabwata MP Given Lubinda and other senior party officials.
Mr Chama also said since the PF government came into power, it has endeavoured to improve the living standards of people through various empowerment programmes it has instituted.
â€œIn the four years PF has been in power, the country has seen massive infrastructure development. Right here in Matero, there is a dual carriageway, clinics and many other developmental projects,â€ Mr Chama said as the crowd cheered in agreement.
He said now that Government has built schools and hospitals among others, President Lungu will embark on a rigorous job creation programme which will endeavour to end poverty and improve the living standards of the people.
Mr Chama also said Zambians must vote into office someone they know worships the true God.
â€œThere is a King in the Bible that chose to build a temple for the Lord and President Lungu has done the same by commissioning the construction of the Tabernacle of Prayer. Mr Lungu led the nation in prayer for recovery of the economy and rains, and as it is, the rains are here,â€ Mr Chama said.
Ms Phiri said she is humbled to see the leadership of the party in Matero still intact because it had been suggested that they had all left with Mr Sampa.
She appealed to the party to remain united and urged those vying for leadership to wait for Godâ€™s time.

North-West, West will be developed – Inonge
Women urged to participate in road construction