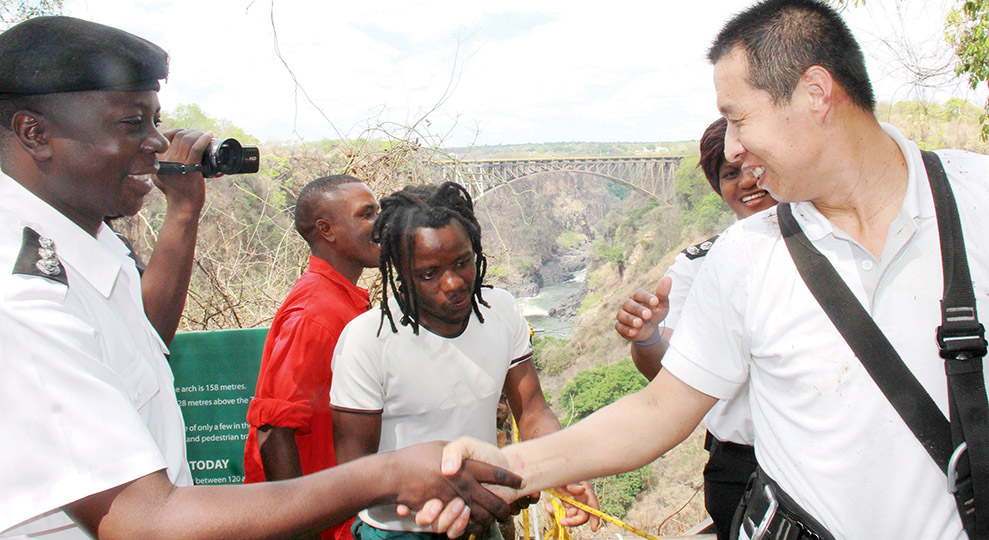 NANCY MWAPE, Lusaka
FIVE years ago, Wang Shunxue made headlines in both local and international media after he slipped and fell into the Victoria Falls but survived.Almost every year, at least one tourist dies after falling into the Victoria Falls.
Mr Wang, who is from China, narrated his horrific experience through an interpreter.
In November 2013, Mr Wang, who was 44 years old at the time, was visiting Zambia to conduct a market research on investment opportunities.
The Chinese businessman had heard about the investment opportunities in Zambia when former President Michael Sata visited China in 2013, then he decided to travel to Zambia and see for himself.
During his visit, a friend invited Mr Wang to Livingstone to see the Victoria Falls. He lodged at the five-star Royal Livingstone Hotel.
At the hotel, Mr Wang had met an Italian woman who asked him if he believed in God.
China has a number of religions and beliefs. The three prominent ones being Confucianism, Taoism and Buddhism. These have shaped the Chinese culture.
Despite not being a Christian, Mr Wang believes in the divine Supreme Being.
“We have a lot of temples in China, I don’t go there for prayers but I believe whole-heartedly that God loves all the creatures in this world,” he said.
A day after arriving in Livingstone, Mr Wang with two of his friends, and the Italian woman, went to view the Victoria Falls.
When they got near the Knife-Edge Bridge, Mr Wang’s friend asked him to take a photo of them with the falls as the backdrop.
The Knife-Edge Bridge is one of the vantage points on the Zambian side where visitors can have a good view of the eastern cataract and the main falls, as well as the boiling pot, where the river turns and heads down the Batoka Gorge.
As he tried to take the shot, Mr Wang had not noticed that the guard rails behind him were broken. He slipped and plunged into one of the sections of the gorge.
The depth of the gorge is 25 metres.
Mr Wang said as he plunged down the gorge, he thought he was going to die, but he managed to grab some shrubs on the face of the cliff and rested his feet on a small stone to balance his body.
Two helicopters were called in to carry Mr Wang or his body from the gorge, but the rescuers could not see the stranded tourist from the sky.
“Soldiers and people who were at the scene started searching for my body. I could hear people calling out my name,” he said.
“I was now telling myself that as long as I’m alive, I have to survive. My friend went to look for help while some women at the scene knelt down to pray for me,” he said.
After hanging on the cliff for over an hour, Mr Wang was rescued by the fire brigade, who were helped by the state police. There was also help from workers from a company called Bundu Adventure, which conducts bungee jumping activities at the bridge.
Mr Wang said a man from Bundu Adventure went down the gorge using a rope and managed to put him into a harness.
“When I was rescued, people screamed, ‘hero! hero! God bless you.’
After the rescue, Mr Wang had a new perspective about life and God. He thinks God gave him a second life.
He is also thankful to the people of Zambia.
“The Zambian people had given me a new life, and from then on, I decided to help 10,000 lives through provision of better medication before I die,” he said.
Mr Wang also decided that he would open a pharmaceutical plant in Zambia.
In the small Gideons Bible which Mr Wang got from the hotel, the Italian lady wrote asking that God grants him grace to achieve his mission in Zambia.
His friend also promised to assist him achieve his business dream.
After the incident, Mr Wang decided not to inform his family members about his near-death experience, and he delayed his flight back home.
His wife became anxious.
When he arrived back in China, the first thing Mr Wang told his wife was that she was very lucky to hear his voice again.
Last March, Mr Wang’s dream was fulfilled. His pharmaceutical company, Kingphar, was opened by President Edgar Lungu.
The plant is located in the Lusaka East Multi-Facility Economic Zone.
Mr Wang said all the equipment in the factory is high-tech imported from Japan, China, America and Australia.
Kingphar Company marks an important milestone in the local medical industry of Zambia, and it is also of great significance to the promotion of public health.
Currently, most of the essential medicine are imported from Asia, Europe and South Africa.
When in full operation, the Kingphar plant is expected to create more than 200 jobs and contribute more than US$6 million towards taxes per year.