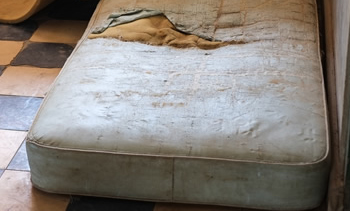 SYLVESTER CHISHIMBA, Lusaka
INSTEAD of finding acceptable ways of informing his wife that he was no longer interested in her and the marriage, one Lusaka husband opted to defecate and urinate on their matrimonial bed to frustrate his wife.
Maureen Phiri, 37, of Libala South said her husband Charles Musonda, 46, of the same township would also shamelessly defecate in other rooms even where he knew their children could find the waste simply to frustrate her to move out of their matrimonial home.
Phiri told the Lusaka Boma Court that problems in their marriage started when Musondaâ€™ s uncle offered him money for business on condition that he divorces his wife. The couple got married in 1997 and have three children together.
Phiri was in court after her husband Musonda sued her for marriage reconciliation.
â€œHis uncle asked him to leave me if he wanted his money. Unable to think of an excuse to end our marriage, he felt defecating and urinating in his trousers or our matrimonial bed in his sober state would convince me to leave him,â€ she said.
Phiri told Senior Court Magistrates Davies Mpundu and Miyanda Banda that Musonda succeeded in breaking their marriage with his behaviour because she could no longer tolerate it.
â€œI cannot be cleaning his dirty clothes or the beddings of a grown healthy man. For years, he hid the fact that he is HIV positive and was taking medication until I discovered when I tested positive. He used to tell me that the ARV drugs were merely immune boosters. I canâ€™t reconcile with such a man. In fact, I want a divorce,â€ she said.
But Musonda said problems in their marriage started in 2010 when he lost his job. He said Phiri lost respect for him as her husband and father of her children.
â€œShe no longer cooks for me or does my laundry. She has also been denying me conjugal rights and has moved out of our matrimonial bedroom,â€ he said.
The court failed to reconcile the couple but advised both parties to sit down with their families in order to help solve their marital problems.