By KALUNGA MUSONDA
THE Supreme Court has reserved ruling in a case in which a man of Lusaka beat his wife to death for not preparing food on time.
This is in a case in which Patrick Kabwe appealed against the death sentence imposed on him by the Lusaka High Court on March 31, 2012
Supreme Court judges Gregory Phiri, Florence Lengalenga and Elizabeth Muyovwe sitting in Kabwe on Tuesday asked why Kabwe beat his wife to death merely for not preparing food on time.
A witness, Prudence Chitembeya, 32, testified in the Lusaka High Court that on the fateful day around 20:00 hours, Kabweâ€™s son went to her house and informed her that his parents were fighting.
â€œWhen I went there, they told me that they were matrimonial fights and I left, I did not reach far and Patrick ran after me and told me to remain by the door of their house and he started chasing after his wife.
â€œI followed him and he caught up with his wife and dragged her back to the house and started beating her again. I asked what the matter was and Patrick responded that she is stupid.
â€œShe asked for forgiveness but Patrick did not listen and continued to beat her with a weapon until she fainted. He asked me to give her water and I did but she could not drink because she had no strength and he poured water on her and continued beating her,â€ Ms Chitembeya said.
She testified that she received information the next day that Kabweâ€™s wife had died. 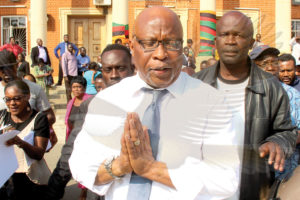