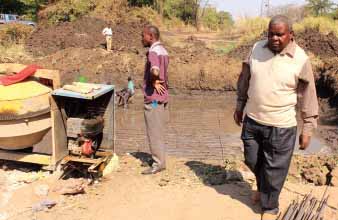 Know Your District: DARLINGTON MWENDABAI, Mambwe
MAMBWE, the home of abundant wildlife and the Kunda and Chewa people, is worth visiting.
The Kunda represent about 80 percent of the population and the Chewa about 20 percent.
The former are believed to be of Bisa origin, but have closer affinities with the Nsenga.
However, the Chewa, who originated from Nyasaland (Malawi) spill over from the plateau.
And a number of Tumbukas are moving into the Nsefu area from the north.
The Kunda are the defacto owners of the land and are said to have entered Zambia from the Luba-Lunda Kingdom with Senior Chief Nsefu as their leader.
Chief Nsefu is being subordinated by chiefs Kakumbi, Mnkhanya, Msoro, Malama and Jumbe.
The district hosts the Kundaâ€™s annual ceremony, the Malaila, in October which celebrates the killing of the â€˜beastâ€™ that terrorised people.
The Kunda people are matrilineal, therefore the nephews succeed the chiefs.
Wildlife
The district is largely a game management area (GMA) which hosts the South Luangwa National Park (SLNP), where one can hear sounds of lions roaring, numerous species of antelopes snorting, eagles screaming, giraffes bleating and elephants trumpeting, especially those living in a cropping area, round 19:00 hours.
The district is made up of diverse vegetation and a botanistâ€™s and wood scientistâ€™s paradise.
Miombo woodland â€“ Miombo woodland is mainly found on high steep hills, skeletal or shallow soils and exposed rock, and is poor quality woodland.
Munga woodland â€“ Munga is a vernacular term for Acacia spp. The vegetation is dominated by species of this genus, including Combreturn spp and terminaria spp.
Mopane woodland â€“ This is a vernacular term for Colophospermum Mopane and applied to woodlands dominated by this species. It is found on lower valley hydromorphic clays and on immature and stony soil.
Riparian (riverine) forests and grassland on the waterlogged or flooded clays occurring in lagoons and depression characterise the meander belt.
Social life
The district lacks recreation facilities and both young and old people resort to beer drinking for entertainment.
Despite being a land of wild animals, strangely one could still see one or two locals staggering their way home after imbibing beer.
There have been isolated incidents of human-animal conflict.
Newly-elected Patriotic Front Malambo member of Parliament Jacob Shuma is worried about the lack of recreation.
â€œLack of recreation facilities is forcing the locals to resort to beer drinking. We need to set up industries to keep people busy, especially the youths, who waste their lives in drinking beer,â€ Mr Shuma said.
President Lungu, who was drumming up support for Mr Shuma during the campaigns in the recent by-election, urged the law-maker to help uplift the standards of the people as Government is opening up the area to more development.
Income levels
The income levels in the district are low, and this has been attributed to lack of development in agriculture. Many people are engaged in subsistence farming.
According to the Mambwe 2010 Status Quo Report, farmers in Kasamanda and Mphomwa reach as much as three hectares per household.
The households mainly use oxen for ploughing.
Although the average family size is six persons per household, between two and four people are usually engaged in work to support the family. Most farmers spend on average four to five hours in the field with the rest doing other chores.
The report indicates that maize and sorghum are processed into mealie-meal for household consumption.
Millet is used to brew beer while some sunflower and groundnuts are used for making cooking oil. Some of these crops are sold.
All the cotton grown is sold. Some of the beer brewed and the cooking oil made from groundnuts and sunflower are sold for cash while portions of these products are reserved for household consumption.
However, the district has a lot of potential for investment in various sectors as indicated in its latest 2014-2016 investment plan.
District commissioner Caroline Mwanza said the plan is aimed at attaining the vision of the district, which is to have a â€˜Poverty-Free Mambweâ€™.
Mambwe is one of the eight districts in Eastern Province and was established in 1998.
â€œCurrently, the district is rapidly growing as it accommodates a flourishing tourism industry owing to its proximity to the South Luangwa National Park,â€ Ms Mwanza said.
The district has a surface area of about 4,840km/sq and lies between latitude 13.30 degrees North and 14.45 South and longitude 31 and 32 degrees East.
It is approximately 700km east of Zambiaâ€™s capital city â€“ Lusaka – and borders Lundazi district to the north, Mpika to the north-west, Serenje to the west and Petauke to the south-west.
Katete is in the south while Chipata is on the south-east side of the district.
Mambwe has a tarred road from Chipata to the South Luangwa National Park. Other road projects that will open up the district are the Mpika-Mfuwe road and the Msoro-Katete road.
According to the Central Statistical Officeâ€™s 2010 census, the district has a population of 68,918 with about 28,088 registered voters.
Sadly, the literacy levels in the district are low at 33 percent while illiteracy is high, standing at 67 percent.
Areas such as Nsefu, Ncheka, Katemo, Lugomo and Chipako have indigenous and predominantly illiterate people while other areas like Cropping, Msoro, Jumbe and Masumba have a mixture of literate, semi-literate and illiterate populations.
The district has only three private schools which offer primary education, but has 34 primary, five secondary and 28 community schools in total.
With the projects the government is implementing and increased attention tourism, Mambwe is headed for a bright future.

What a hotel is not: Spotlight on hospitality
From Lusaka to Baghdad, scribes memories (Part 2)