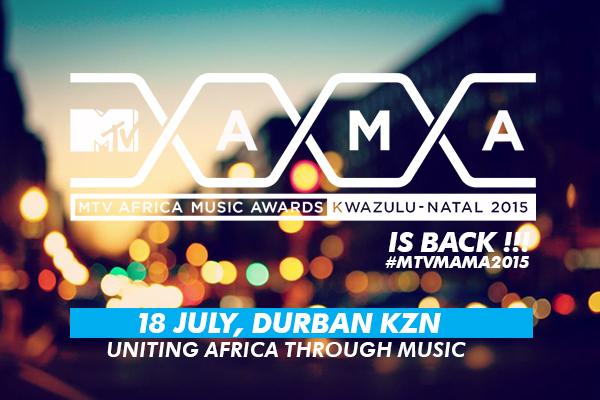 DURBAN – A decade after bursting onto the world stage, Viacom International Media Networks (VIMN) Africa and MTV Base are once again shining a global spotlight on African music, creativity and achievement at the fifth edition of the MTV Africa Music Awards (MAMA).
The MTV Africa Music Awards KwaZulu-Natal 2015, served by KwaZulu-Natal Province in association with Absolut and in partnership with The City of Durban, returns to the Durban International Convention Centre (ICC), KwaZulu-Natal, South Africa on July 18, 2015.
The definitive annual celebration of African talent, MAMA 2015 takes â€œevolutionâ€ as its theme, recognising and rewarding musicians and achievers who have made the most impact on African youth culture over the last 12 months, while also celebrating the development of the continentâ€™s talent and creativity over the last 10 years.
The ceremony will feature stunning performances from African and international artistes along with unique collaborations.
MAMA 2015 will celebrate African talent across 17 award categories such as Best Male, Best Female, Best Song and Best New Act Transformed by Absolut.
The contribution of artistes from Portuguese and French-speaking Africa will also be recognised in the Best Lusophone and Best Francophone categories.
In line with the MAMA 2015 â€œevolutionâ€ theme and VIMN Africaâ€™s 10-year celebration, this yearâ€™s show will also feature a special edition Artist of the Decade category to recognise artistes whose careers have flourished throughout the last 10 years.
Additional categories include the MAMA Leadership Award and Personality of the Year. The nominations for the awards will be revealed on 11 June 2015.
First staged in 2008, the MTV Africa Music Awards has recognised the talent of musicians, achievers and personalities from across Africa, rewarding iconic artistes and gamechangers such as 2Face Idibia, Big Nuz, Davido, Dâ€™Banj, Flavour, Gangs of Ballet, HHP, Fally Ipupa, Liquideep, Mafikizolo, Lira, Nameless, Lupita Nyongâ€™o, Clarence Peters, Diamond Platnumz, Anselmo Ralph, Sarkodie, P-Square, Tiwa Savage, Cabo Snoop, Toofan, Zebra & Giraffe, Uhuru and Wahu among others.
The MTV Africa Music Awards 2015 will broadcast live on MTV Base (DStv Channel 322) and MTV (DStv Channel 130) and transmitted worldwide on partner stations and content platforms from July 18. â€“ MTV

Namvula has a full, busy schedule
James Sakala gears up for headlining show