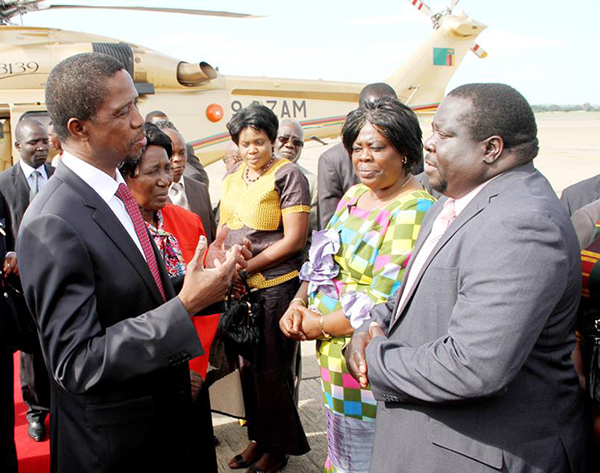 DOREEN NAWA, Lusaka
GOVERNMENT says Zambians should not allow anyone to continually use President Lunguâ€™s recent illness to damage the economy of the country.
Minister of Information and Broadcasting Services Chishimba Kambwili said despite President Lungu being examined and declared fit for duty, certain individuals have continued to maliciously use the issue to scare away investors.
Mr Kambwili, who is also Government spokesperson, was speaking when he met Zambia Union of Journalists (ZUJ) executive members last week on Wednesday.
Mr Kambwili said misleading statements can negatively affect Zambiaâ€™s economy and this could reverse the economic progress the country has made.
â€œThe problem with Zambians is that you do not realise the danger that certain statements in the media have on the economy of this country. Why should we allow certain individuals to continuously talk ill about President Lungu, who is fit and working?â€ Mr Kambwili said.
Mr Kambwili said Zambians should stand up and defend the truth instead of keeping quiet and allowing individuals with hidden intentions to spearhead their hidden agendas.
â€œThere are some media houses that have continuously taken President Lunguâ€™s recent illness as an issue and are painting a picture which is slowly affecting the economy of this country.
â€œYou know how powerful you the media are.Â  Once you publish or broadcast a thing, certain people will take it as gospel truth even if it is not. As the media, it is your duty to provide truthful information on the current health of the President because failure to do so will affect the innocent Zambians,â€ Mr Kambwili said.
He said any effect on the countryâ€™s economy largely affects the rural populace and innocent Zambians that do not even understand the intentions of the malicious statements.