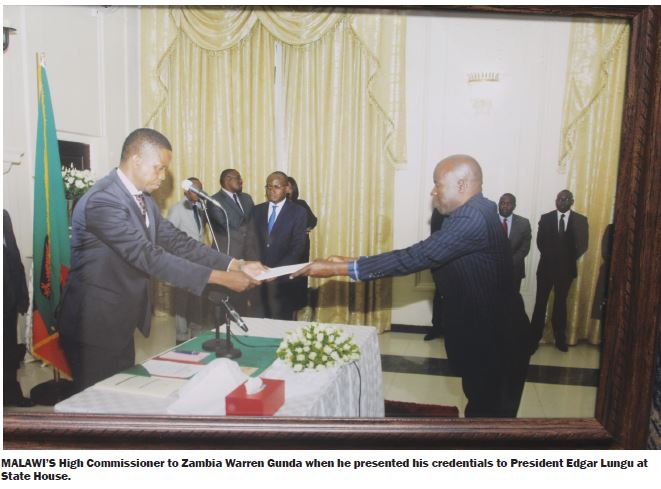 MWAPE MWENYA, Lusaka
MALAWI’S High Commissioner to Zambia Warren Gunda, our guest on this column this week, bemoans the low level of intra-regional trade in the Southern African Development Community (SADC) and Common Market for Eastern and Southern Africa (COMESA).
Mr Gundu says member states in the two economic blocs need economic diversification to promote intra-regional trade based on comparative advantage of industrial produce. He also shares that trade between Zambia and Malawi is equally poor because they mainly produce similar agricultural products.
On Zambia’s economic front, Mr Gunda urges that the current economic turbulences are not unique to Zambia, saying they are a global phenomenon and not a making of the Zambian Government.
The high commissioner also touches on past border disputes between Zambia and Malawi in the Eastern Province, and urges the two countries to clearly demarcate their boundaries to avoid future disputes.
However, he holds that the two countries enjoy strong diplomatic ties dating back to the pre-independence era.
Zambia and Malawi share a common boundary in the eastern region, so naturally their relationship dates back to the colonial era when the two countries regarded each other as one because of not only their geographical setup, but colonialism dilemma.
The two countries share a common culture, with some ethnic groupings between them sharing one chief and CLICK HERE TO READ MORE