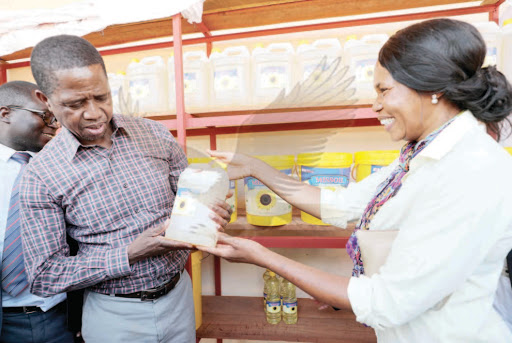 STEPHEN PHIRI
Lusaka
IN 2012, Dutch national Frans Kranendonk was just a guest at Just Africa Accommodation, a lodge in Mambwe which is owned by Misozi Kadewele.
Fast forward later, the two would be business partners.
Mr Kranendonk, who had initially travelled as a tourist to Zambia, used to help women in Mfuwe who were engaged in village banking.
Ms Kadewele’s mother, Esther, was among the women involved in village banking.
Ms Kadewele had settled in Mambwe after divorcing her husband, which was a difficult period in her life.
“I had just been divorced by my husband who left me with two children and I decided to come and stay with my mother and this is how I met Frans,” she said.
However, that was much later. Before that, she had to do some menial jobs to survive.
“After my divorce I worked as a cleaner after which I started making jewellery using seeds,” she said.
“I went through a rough time but that situation made me strong.”
The two children are a 27-year-old daughter, who is an accountant and is assisting her to construct 18 apartments in Ndola while the other is a 25-year old son who studied business administration and is in India.
So, how did Ms Kadewele navigate through?
“I had the land for us to start the business while Frans had the money and the machinery,” she said.
In 2017, Mr Kranendonk came up with a business plan which Ms Kadewele approved and thereafter it was all systems go.
Mr Kranendonk invested about US$500,000 into the business which they named Missoil Limited.
Missoil, which produces cooking oil from sunflower, sits on a four-hectare piece of land.
Initially, they faced difficulties with the paper work but Malambo Member of Parliament Makebi Zulu, who is also Eastern Province Minister, was on hand to assist.
The paper work with the Zambia Development Agency (ZDA) was completed andmachinery was imported.
President Edgar Lungu opened Missoil Limited on August 27, 2018.
“That was a great day and everyone associated with Missoil Limited was happy to see President Lungu kick- starting our production,” Ms Kadewele said.
“The opening of the company by President Lungu has opened doors for the company for other investments.”
The company has employed 50 extensions officers and are dealing with 2,000 farmers.
Missoil Limited buys sunflower seeds from Chipangali, Lundazi, Msoro, Chiparamba and Chadiza.
The company supports farmers with seed and later buys sunflower from them.
Ms Kadewele says the Mambwe fraternity has been supportive of the company which they regard as the pride of the district.
She urges women to think outside the box if they are to make it in business.
Ms Kadewele, who at the time she was divorcing with her husband her two children were five and three years old, said she did not allow divorce to overcome her ambitions of making it in life.
She strongly believes that women have the ability to rise to the occasion if they push themselves.
“I am only a Grade 12 who did not have an opportunity to go to college or university,” Ms Kadewele, who was born on May 28, 1970 and is the second child of Esther and Geoffrey Kadewele, said.
“This shows that women can do what men can do or even better.”
Ms Kadewele attended Dzikomo Primary School, where she enrolled in 1977 and did her Grade Eight to 12 at Masala Secondary School in Ndola.
Apart from Missoil Limited, Ms Kadewele is also running a poultry.
She has 2,000 chickens which she sells at K50.
The eggs are sold at K40 per tray.
“The chickens and eggs business is good and I supply to local people,” she says. “Mambwe residents have been supportive of the business.”
Ms Kadewele uses chicken droppings to produce methane, which she uses for cooking.
She said she saves K600 per month from not buying Zesco units.
“I produce gas from chicken droppings and this has helped me a lot,” Ms Kadewele said.
“I have developed my bio-digester and I urge Zambians to follow suit so that they continue running their businesses without getting disturbed when there is no power.”
The country is experiencing load-shedding due to a drought experienced in the 2018/2019 season.
Ms Kadewele said there is need to think outside the box if businesses are to continue running in view of load-shedding being experienced across the country.
And Mr Kranendonk describes Ms Kadewele as a trusted business partner.
He said the business is a 50-50 arrangement and both partners are determined to push it to higher heights.
Mr Kranendonk is confident that Missoil Limited will contribute to the economic development of Mambwe and Eastern Province at large.
“Mambwe residents are proud of Missoil Limited and they have taken it as theirs,” Mr Kranendonk said.
And Frank Zulu, 24, a supervisor at Missoil Limited, has been with the company since 2016 and describes Ms Kadewele and Mr Kranendonk as genuine employers who treat all the workers equally.
“I am happy to work for Missoil Limited and all the workers are treated equally,” Mr Zulu said.
“The madam is a good employer.”
He said it is as a result of working and having a steady income that he decided to marry last year.
“I am now settled with a wife and I owe it to the madam [Ms Kadewele],” Mr Zulu said.
For Ms Kadewele, her motto is: “Born in 1970, mother of two, Mfuwe entrepreneur with a passion of making Eastern Province self-sufficient by having ready market for agriculture produce and products. Together we can make a difference in our country.”