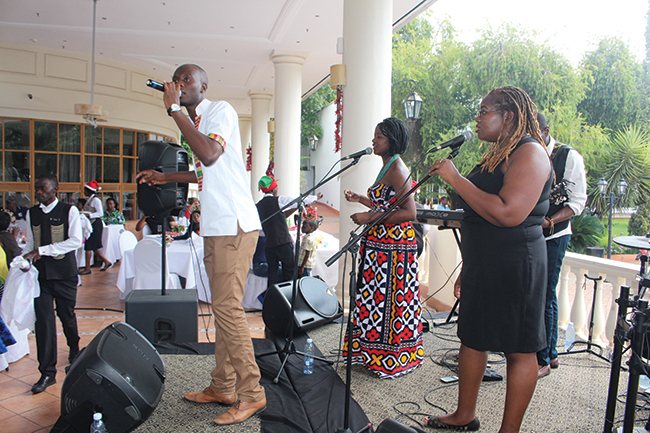 NKOLE NKOLE, Lusaka
THEY promised fans they would go away with an experience for attending their last local show of the year and headliners, Magg44 and Pompi, certainly delivered on their word.
Opening the show dubbed, The Experience II, at Lusakaâ€™s Mulungushi International Conference Centre (MICC) last Friday, was upcoming artiste, Josh, who is under the music label Brave Only.
Poetry also had its place at the show when the poets, Les Diplomatique, engaged the crowd with their spoken word piece that focused on the pride of being an African and the beauty in originality.
Guitarist Micah wowed on electric guitar with her performance of familiar melodic tunes while singer, Mikrophone 7â€™s hit single Blesser got the audience chorusing along.
Like the guitarist Micah, dancer Mupasha added a different feel to the event with his solo act that closed the curtain raisers and paved the way for Abel Chunguâ€™s set.
Chunguâ€™s short set was heartfelt particularly with his rendition of the worship song Pa Makufi which talks about the power of intercession.
â€œI wrote this song because of people like my mother,â€ he said, before explaining how he had survived on his motherâ€™s prayers throughout his life.
He paid tribute to rapper and producer Magg44 before introducing him as the next act to the audience.
Chungu spoke of Magg44â€™s versatility as an artist and described him as, â€œOne of the best producers in the world.â€
Magg44â€™s entry was met with the audienceâ€™s cheers as he sent everyone into wild excitement by opening with the single, Shine and Wave from his debut album, Jijue.
When he transitioned to Pwililika, much of the crowd was on its feet as the excitement swept across the hall.
Artiste Tim, formerly Thugga of Zonefam, joined Magg44 for the song Swag, which features on Magg44â€™s 2015 sophomore album Brave Only.
For the song, Tamanga, Magg44 introduced a special guest who he joked was a celebrity to fellow musicians.
Although unfamiliar to the younger members of the audience, the Canada based Blessingtone Malenga, soon demonstrated what a gifted musician he is when he took to the keyboard and was later backed by his wife Victoria.
For the performance of Nchito, which is Magg44â€™s dedication to hardworking women, the artist welcomed the female drummer, Debbie to the stage.
There were loud screams from the crowd when Brave Only artiste Esther Chungu, who recently released her debut album, Mubanga, was joined by artist James Sakala to perform the song, Paka Paka.
Magg44 returned to the stage shortly after and delivered a few more of his hits such as Vichani, Apologise and Mwentula.
Even before the last act of the night could appear on stage, the audience had a good idea who it was as Magg44â€™s band was switched for the familiar faces of the Crazy Fish band.
The African Eagle, Pompi emerged from backstage after keeping the crowd in suspense and his set took off with a rock version of the song Hygiene.
He needed no backup as the audience, on its feet for his entire set, chorused line after line of songs such as Zuhile, Kakambidwe, No Rent, Simpulified, Maganizo Pandeke and Giant Killer.
It was overall a night that delivered on its theme of giving people an experience they would not soon forget.