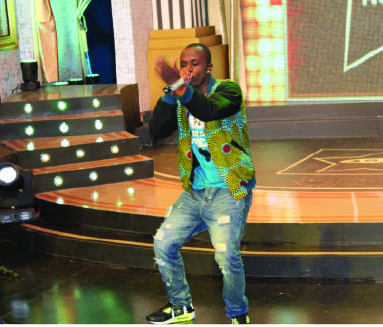 …I have worked with those I deem to be suitable and mature
FELIX NYAMBE – Lusaka
BARELY five years ago, he was one of the many local music producers who derived pleasure in helping upcoming artistes realise their dreams.
To the less initiated, Macky 2 was just one of the budding hip-hop upstarts wanting to take rap music to another level.
Born Malaza Kaira 30 years ago, Macky 2 is now what he himself calls a true revelation of a rapper from â€œzero to heroâ€.
Having debuted on the local stages with Take Over in 2010, Macky 2 has always turned heads wherever he has appeared and wooed crowds at his numerous shows.
â€œI just enjoy what I do and try to be as original as possible while perfecting the whole act,â€ said the Zero to Hero rapper.
In an interview recently, Macky 2 said he has always loved singing since his childhood days in the Catholic Church in Ndola.
The artiste spoke about how many people have perceived rappers as â€œgangstersâ€, but he has always wanted to correct the misconception.
Following the establishment of Alfa Entertainment several years ago, Macky 2 has been working with several local artistes regardless of their music genre.
â€œI am an all-round entertainer and I have worked with those I deem to be suitable and mature,â€ Macky 2 said.
And to put his point across, in 2011, Macky 2 left the Copperbelt where the current crop of music stars hail from and headed to Lusaka.
His initial stop was the reputable Digital X, where his album, Ndimupondo, was released in collaboration with Alfa Entertainment and J-Kayo.
â€œI worked with several artistes on the album, including my brother, Chef 187, Pilato, General Kanene, Nice M, J Blaze and Afunika,â€ Macky 2 said.
The songs Back on My Grind, Seka uponokwe and I am Zambia Hip-hop (both featuring Chef 187), Mami Niuze (featuring Afunika) and Tibailapo (featuring J Blaze), made the album.
But it was not only those smart collaborations that made the whole album a masterpiece because Macky 2â€™s own I am The President and Number 1 Fan, were radio hits.
With these run-away hit songs, Macky 2 registered himself among some of the finest hip-hop artistes of his generation.
But just when Macky 2 was sailing high with Ndimupondo, the rapper, like most of his mentors in the USA, was in August 2011 caught on the wrong side of the law.
â€œI was detained with my friend â€˜Generalâ€™ Kanene for allegedly stealing copper cathodes using a truck,â€ recalled Macky 2. But that is all but history!
Back in the studio, Macky II returned with some hit songs including some duet acts with P-Jay, titled Landlord.
He also worked with JK on the gospel-inspired Lesa Mukulu, while his collaboration with Afunika on the song Nangu Ba Nchinge, was irresistible!
With his album Legendary topping the charts in 2012, his video of So Beautiful went on to scoop the coveted Best Video of The Year during the Born & Bred awards.
â€œI am excited to receive this awardâ€¦ I have worked for it and I deserve it,â€ said an excited Macky 2 amid some deafening cheers from a jam-packed audience at Government Complex.
In the same year, Macky 2 also received the Ngoma Award nomination in the Best Male Performer, thanks to such hit songs as No More Love (featuring Kâ€™Millian).
Boasting of a chain of hits, including Shipwe Shipwe, Teti and Amaka Ya kwa Lesa, Macky 2 started working on his album, Zero to Hero, which he launched at Polo Grill on December 27, 2013.
And in a space of one year, Macky 2 was only second to Slap D in being recognised as the most happening rap/hip-hop artiste during the Zambia Music Awards.
He was nominated in five categories and only managed to scoop the Album of The Year award for Legendary, while Slap D walked away with five awards.
This year, Macky 2 has entered the BBA Hotshot Season 9 House, head high, with a chain of hit singles including Mam Rebecca, Bana Chanda.
co.uk/0979360993/0964983656.