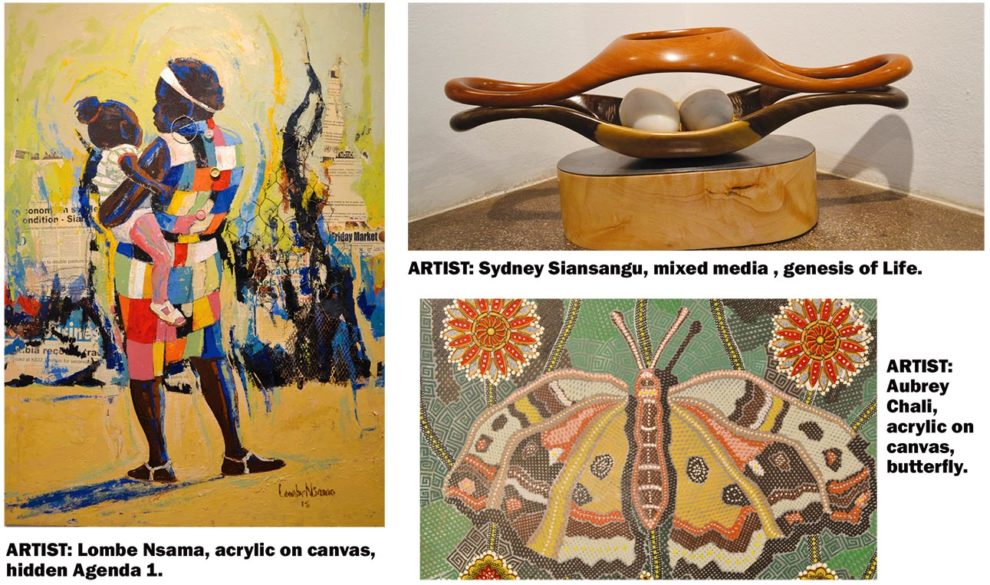 MOSES WALUBITA, Lusaka
ART is the only attribute God has given to mankind which cannot evaporate despite people going into various professions.
The Henry Tayali Visual Arts Gallery in Lusaka yet again showcased works by three Lusaka-based artists, Sydney Siansangu, a sculptor, and painters Aubrey Chali and Lombe Nsama.
The subject matter was focused on the folklore of Zambian life. The artists captured moments that are either very ordinary or down to earth as people preparing food, a woman holding babies including some traditional motifs or symbols.
The artists have mixed styles. As for Siansangu, he likes combining well-polished pieces of wood from different trees. He has become a smart finisher of his work, taking into detail the intricate craftsmanship.
Siansangu has simplified his approach to make it easy for customers and viewers to reach his sculpture. He has become one of the finest finishers. In the exhibition, he included works like family values, musical instruments and postures.
Nsama is a semi-realistic painter who has defined his figures as solid black depiction of African woman, which are faceless, but they tell the story with a colour background and surrounding.
His thick dubs of paints give a painting a rich texture and relief effect with super-imposed metal objects and wire pasted on the canvas surface. He has fused in newspaper cuttings as part of the background.
Aubrey Chali has coined his style as “Chalinism”. This style mimics weaving pattern. When you look at his painting, he has developed a technique that would resemble knitting when in actual fact he has used paint to weave instead of cotton, thereby making it extremely complicated.
However, Chali tackles ordinary subjects of everyday life and traditional masks. Partly, he has incorporated cut-offs from “Chitenge” to fuse into the style and make it look as if it were one.
“His wife is a tailor where he gets the cut-offs, which are interestingly connected to his thoughts,” noted Zenzele Chulu, curator of the exhibition at the Henry Tayali gallery.
“His work has also been well received internationally, although he was denied a visa to travel abroad,” Chulu said.
Chali never gave up and currently he has his works exhibited in Cape Town, South Africa. This has given him motivation to work hard and improve on his output.
The Henry Tayali, being a prime art gallery, is always giving exhibition platform for Zambian talent. The gallery is looking forward to hosting another exhibition this month to commemorate Zambia’s independence with artists coming from across the country. The Independence exhibition is an annual event.
Art is more important than the people who decide its existence, because it saves them too by providing them with, often ignored, visible, yet unseen aesthetic benefits. Art extends beyond the genre of painting and sculpture which is a common world famous description of what art should be.
Nearly every event, function or situation requires some artistic service to be visible for its fulfilment of purpose, yet the users and beneficiaries have no clue what is serving their humanistic endeavours to be successful.
“As exponents of the arts, we are here to make this known to victims of ‘miseducation’ of what art means to the world. Art is everything and art is everywhere. In fact art is the basis of education and the only undisputed subject that is applicable in all other subjects.
“We begin school life with art lessons. From kindergarten art reigns supreme. Art has a way of influencing every bit of development from village to national level, many times without people realising the involvement of art in things they do,” Zulu wrote in “Art Pages” which intends to look deeper into the art world and bring out the desired information.
Every product design begins with a drawing in its planning stage before it is implemented as a utility product we use everyday in our homes. The task is very interesting because it is an artist’s initiative whose resources will come largely from within the art community.
Essentially art can transform the people’s ways of thinking through its various channels of communication and disciplines. Art is a roundabout feature that has many roads leading out as various art discipliners such as visual arts, music, theatre, film, fashion, design, architecture, graphics, poetry and writing.
“These disciplines can be broken down further into specific fields that operate within. For instance in visual arts, you are bound to see painting, sculpture, print making, photography, papier mache (art work made of paper), performance art and , mosaic as techniques employed to feed the appreciative, curious eye”, Zulu explained.
Within the sculpture, for example, you find those using metal, wood, stone, and others a combination of any material (found objects). These explain how wide the field of art is. The Henry Tayali Visual Arts Gallery is a well-established centre for Visual Arts in Lusaka where local artists, Zambia’s indigenous arts meet.
“Despite it being part of the genesis of Zambian contemporary art and home to the history of a country’s best artists, it is surprising how few Lusaka dwellers are aware of its existence. Artists have used it for numerous exhibitions, workshops, seminars and training over the years,” Zulu said.
Artists’ careers have been launched from Henry Tayali Visual Arts Centre, said Antonio Franklin and Zulu. These artists have evolved, moved and grown massively out of this space to establish their own initiatives, giving room for young emerging artists to take over the running of arts at the centre.
Artists such as David Chibwe are remembered to be the ones who broke the rusting lock and chains.
Flinto Chandia, Lutanda Mwamba, Eddie Mumba and David Chirwa are some of the earliest artists to work from the centre, whilst Agness Yombwe, Martin Phiri and William Miko came in as the first interim national executive committee of Visual Arts Council, which had its meetings at the centre. The centre has continued to host artists’ important fora.