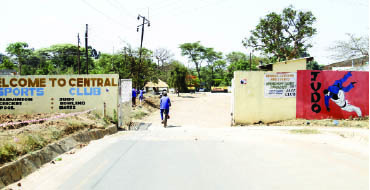 Contributing to sports development
DIANA MUTAKAFIMBOÂ  – Lusaka
ZAMBIAâ€™s 50th independence anniversary cannot be complete without highlighting the benefits sport has contributed to the countryâ€™s economy since 1964.
While most people would view sport as a mere recreation activity, the actual fact remains the opposite considering a good number of people that have exceled in life through it.
Owing to the fact that sport is and will remain an important aspect in peopleâ€™s lives, whether at professional or social level, it is equally important to ensure the sporting facilities are friendly for all.
Generally, the country is blessed with a reasonable number of sports facilities that have been in existence way before independence.
Before then, these facilities served elite colonialists with only a few blacks having access to them.
Central Sports Club in Lusaka is among the facilities that existed years before the countryâ€™s independence.
Located in the heart of Lusaka, Central Sports Club houses over five sports disciplines, with judo proving to be the most popular since 1966.
According to one of the longest serving executive committee members, James Matale who joined the club in 1976, the foundation stone for the main club was laid in 1956, meaning that other facilities existed before the main club was built.
By then, the club was purely for the â€˜whiteâ€™ expatriate population that resided in the surrounding areas that included Rhodespark, Longacres, Northmead and Kabulonga.
However, when the country got its independence in 1964, blacks were promoted and had the right to seek membership at the club.
This happened soon after independence although a significant number of blacks joined the club in the early 1970s.
However, the revolution occurred in 1978 when the first indigenous Zambian, only identified as M. Chisanga, took over the reins of the club.
This was the beginning of the black leadership at the club whose structure by then had the executive chairman and the chairman with other members in the committee.
Among the sports disciplines the club offered include, bowling, badminton, judo, swimming, cricket, tennis and to a smaller extent football.
The club had so much land that plans were underway in the mid-70s to put up a nine-hole mini golf course that unfortunately did not come to fruition.
The golf course project was completely shattered in the late 1980s when the ear-marked land was given away to the Catholics to build a Cathedral.
This happened in 1989 when Pope John Paul II visited Zambia.
Initially, the Catholic community sought permission to use the area, which now houses Cathedral of the Child Jesus, to hold a mass with the Pope.
After the Popeâ€™s visit, the area became popularly known as â€˜Pope Squareâ€™, being the place the sovereign head of the Catholic Church used to conduct mass.
The land was then given to the Catholic Church to build the first catholic cathedral in Lusaka.
Unfortunately, there was little the club management could do to protect their land for a planned project which completely phased out golf as part of Central Sports Club.
That also included the area for the tennis courts and football pitch, causing the decline of the two disciplines.
However, other disciplines remained active and competitive.
The cricket section produced a very strong squad that competed internationally, while bowling has remained part of the clubâ€™s stronghold producing players that are still competing at international tournaments.
Just this year, bowlers that represented the country at the Glasgow Commonwealth Games are all Central Sports Clubâ€™s products.
The club has produced players like the late Beatrice Mali, Foster Banda and Matimba Like who have all won several awards.
In the badminton section, Juma Muwowo, Lucio Mambwe, Stanley Mwangulu and the late Abraham Mutale all emanated from the club.
However, judo since 1966 has proved to be the clubâ€™s stronghold under the Irish born Fr Jude McKenna who has transformed the sport at the club through his international connections.
Fr Jude who is one of the founder members of the Zambia Judo Association (ZJA) came to Africa through Cape Town, South Africa as a Capuchin Missionary in 1966.
In 1967, he built a dojo in Livingstone before he was elected to the executive of the Northern Rhodesia Martial Arts Federation in 1969.
He was elected ZJA president in 1977, a position he held for over 45 years and has served on many other international judo boards.
In short, Fr Jude single handedly transformed the judo section at Central Sports Club which is now considered as one of Africaâ€™s best judo halls.
International Judo Federation (IJF) president, Marius Vizer, who recently visited the country had a feel of the dojo declaring it as one of the best in Africa.
Fr Jude groomed players like Wakungâ€™uma Shapa and Boas Munyonga among others that have made the country proud at international competitions.
Munyongaâ€™s recent achievement was his Commonwealth Games bronze medal. In fact, judo is one unsung sport that has won more medals for Zambia at international competitions.
These are some of the achievements the club has recorded since independence.
The club was essentially built to provide social recreation and sport.
It has achieved its intended purpose and is one of the countryâ€™s oldest clubs that has produced international athletes in different disciplines apart from providing a social platform for Lusaka residents.
So far, the club led by Raymond Jika has three social clubs usedÂ  for income the generation of income.
It houses the â€˜famousâ€™ Jazz Club among others and currently has a membership of over 200.
The club also raises funds through membership fees and concerns of rehabilitating the entire structure are rife.