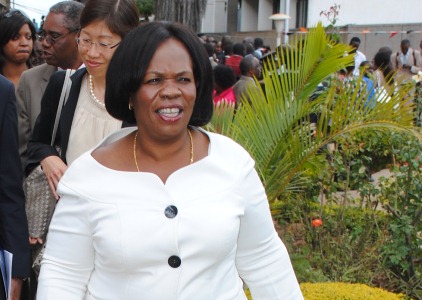 CHIMWEMWE MWALE, Parliament
MINISTER of Gender Nkandu Luo has said Government will soon table the Marriage and Child Code bills before Parliament in a bid to, among other measures, effectively address early marriages in the country.
Professor Luo told Parliament on Tuesday that the bills will also help address the challenges arising from dual marriage laws, namely customary and statutory.
She said in a ministerial statement on the first-ever girl child summit held in Zambia recently that the Child Code Bill will particularly help address the definition of a child.
The summit, which was held in November 2015, and graced by President Lungu, attracted 1,100 delegates from across Africa.
Prof Luo said this is because a child is defined differently in different circles, including at the instances of obtaining national documents such as the green national registration cards, driversâ€™ licences and votersâ€™ cards, among others.
â€œThis bill will address the definition of who a child is and it has since been passed to the Ministry of Youth, Sport and Child Development,â€ Prof Luo said.
And Prof Luo said most African countries are learning from Zambia about best practices in fighting early marriages because the country has devised a multi-sectoral approach with various stakeholders involved in fighting the vice.
She said 11 ministries have come together and that traditional and church leaders have also been mobilised to help lead the fight against child marriages countrywide.
This was after a question by Chongwe Member of Parliament Sylvia Masebo (PF), who wanted to find out the best practices being used in Zambia to fight the vice.
â€œThe main objective of the summit was to share experiences, good practices and challenges on ending child marriages at country, regional, continental and international levels particularly from countries that have already launched the African Union Campaign on Ending Child Marriage in Africa.
â€œThe summit was also structured to secure and renew commitments from stakeholders notably governments, to invest more on ending child marriages in their respective countries,â€ said Prof Luo.