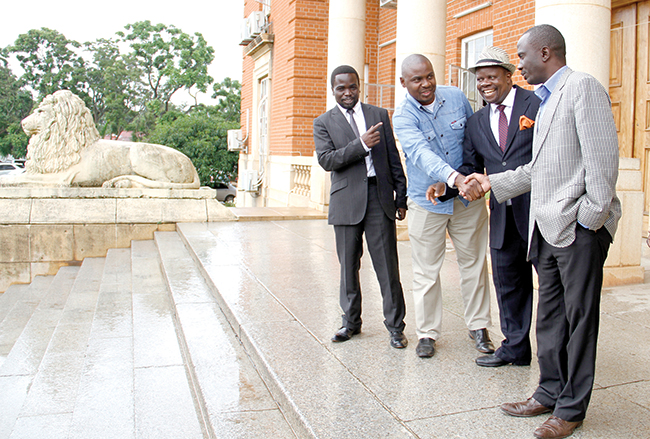 CAROLINE KALOMBE, Lusaka
FOUR opposition political party leaders have petitioned the Constitutional Court to determine that President Lungu is eligible to stand as a candidate in the 2021 presidential or other future elections.
The petitioners are Christian Democratic Party president Danny Pule and Zambia Republican Party president Wright Musoma.
Others are Pastor Peter Chanda, president of New Congress Party, and Citizens Democratic Party president Robert Mwanza.
The opposition party leaders are contending that there has risen a political debate of the tenure of office of President Lungu and his eligibility to stand as presidential candidate in the 2021 general elections because the election held on January 20, 2015 does not constitute a full term of office.
They have submitted that the 2015 election was held following the death of Michael Sata who had been President for three years.
But President Lungu, the petitioners argue, only served for one year and six months after winning the January 20, 2015 presidential election.
They contend that according to Article 106 (6) (b) of the republican Constitution, this does not constitute a full term of office because he served for less than three years.
The petitioners are also arguing that there were amendments that were made to the Constitution of Zambia on January 6, 2016 contained in the Constitution of Zambia (Amendment) Act number 2 of 2016.
They believe that President Lunguâ€™s election in the August 11, 2016 general elections is his first full term as President of Zambia and that he is eligible to stand in the 2021 general elections as presidential candidate, which will constitute his second and final term of office.
Dr Pule, Pastor Chanda, Mr Musoma and Mr Mwanza want the court to declare that President Lunguâ€™s election in the January 20, 2015 election which expired on August 11 last year does not constitute a term of office according to Article 106 (b) of the Constitution of Zambia.
The four also want the Constitutional Court to declare that Mr Lunguâ€™s first term of office began on September 13, 2016 when he was sworn in as President for five years and also that he is eligible to stand as a candidate in the 2021 presidential election or other future elections.
President Lungu has said he will stand as presidential candidate in 2021 if his sponsoring party, the Patriotic Front, adopts him.
The matter has become a hot debate issue among competing interests.