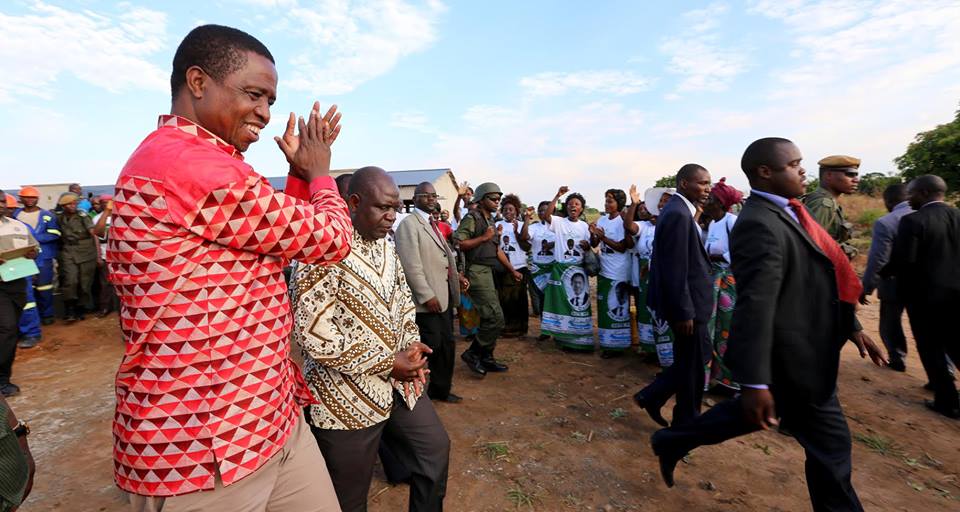 CHAMBO NGâ€™UNI, Luano
PRESIDENT Lungu has said that his administration is in a hurry to take development to rural areas.
He said people who live in rural areas are also Zambians and should not have challenges in accessing health, education, agriculture and transport services.
Mr Lungu said the Government is working on roads to improve connectivity and open up rural areas for development so that they attract essential government workers such as nurses, doctors and teachers.
The President, who is on a working visit in Central Province, said Government is fulfilling the promises that late President Sata made to the people of Luano.
â€œFor this place to develop you need good roads, schools and clinics. Roads are needed here to open this area for development,â€ Mr Lungu said when addressing hundreds of people at a rally at Old Mkushi Primary School.
â€œIt does not mean that when you live here, you should suffer. We donâ€™t want Zambians to suffer because they live in rural areas; you also have the right to take children to school.Â  These are the things Mr Sata promised and we are fulfilling them,â€ he said.
He commended Mkushi South member of Parliament (MP) Davies Chisopa for channelling the 2013 and 2014 CDF to buy drilling rigs which will help to improve the provision of water in the area.
The President told the gathering that he was in Luano to thank them for voting for him during the January 20 presidential election. He said he was grateful that the people voted for him despite the lies that detractors told them about him.
And President Lungu has warned PF members who have started campaigning for adoption as parliamentary candidates for 2016 to stop their campaigns.
Mr Lungu said he will not allow any divisive activities in the ruling party because the serving MPs have got the mandate up to 2016. He wondered why some people are canvassing for adoption when the party leadership has not invited applications from parliamentary hopefuls.
President Lungu further said the ruling party will not have provincial elections, saying the current provincial leadership will continue to be in office.
He said those campaigning for positions at provincial level should stop doing so.Â  He is concerned that some campaigns, if left unchecked, would divide the party.
Earlier in the day, President Lungu met chiefs from Luano district and assured them of Governmentâ€™s commitment to delivering development in their respective chiefdoms to improve living conditions of their subjects.
The chiefs that the President met at the district commissionerâ€™s office were Senior Chief Mboloma, chiefs Kanyesha, Mulungwe, Chembe and Chikupili.
During the meeting, President Lungu (below) directed the Zambia National Service to work on two roads in Luano to improve connectivity.
The President is on a working visit to Central Province and he is today expected in Chitambo and Serenje.
He said this after Central Province Minister, Mr Chisopa, informed him that Chief Mbosha could not make it to the meeting because of the poor state of the road leading to his chiefdom.
The President also assured the chiefs that he desires to improve the roads to promote agricultural productivity and ease the movement of people and goods.
And Chief Mboloma said the chiefs in the district were happy that the President decided to meet them before touring development projects.
He further said the chiefs are happy with President Lunguâ€™s leadership and he urged him not to listen to people who do not mean well, but rather focus on providing good leadership, developing the country and improving living conditions of the people.
The President visited the construction site for district administration offices and the post office.
And Zambia National Broadcasting Corporation reports that President Lungu says he will prioritise the development of rural areas.
Mr Lungu says this will be done through allocation of funding to facilitate development in these areas.
Speaking at State House shortly before departure for Central Province, Mr Lungu said the region was lagging in development, hence the need to inspect progress on some development projects that Government is implementing.
And President Lungu has called on Zambians to support measures that Government has put in place to stabilise the Kwacha.