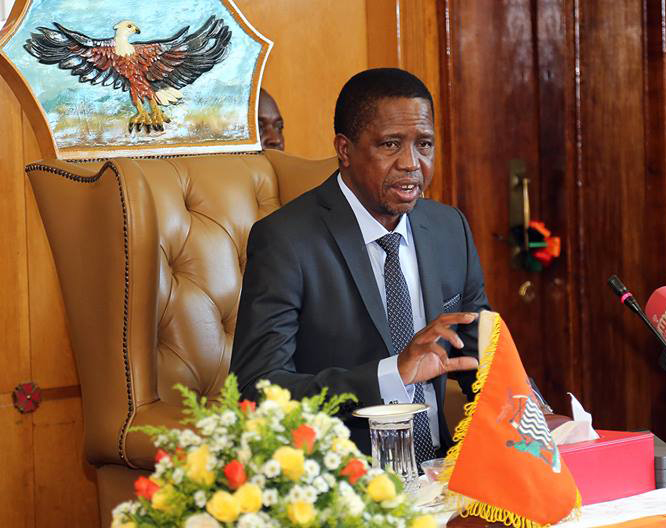 MWILA NTAMBI, NKOMBO KACHEMBA, Kitwe
PRESIDENT Lungu has directed local authorities to first find alternative space to relocate vendors before removing them from the streets.
The President also expressed displeasure at the manner in which local authorities are removing street vendors from the streets without  giving them alternative places to trade from.

The head of State said local authorities are supposed to provide decent trading places for vendors before removing them from the streets.
President Lungu cited an incident in Kitwe where a street vendor was battered by the Kitwe City Council [KCC] police for trading on the streets.
“My heart bled when I heard what happened here in Kitwe.  Nalilila [I cried]. We should find alternative space for the street vendors before removing them from the streets,” he said amidst cheers from the marketeers.
President Lungu was speaking in Kitwe yesterday during the handover of a trading shelter at Chisokone Market built at a cost of K1 million.
President Lungu said it was Government and civic leaders’ mandate to provide decent trading places for traders.
He said Government has learnt some lessons from what transpired in Kitwe and will mobilise resources to help KCC build a decent trading place for the vendors.
And President Lungu said he will not tolerate lawlessness and warned that law-breakers will face the wrath of the law.
He urged Copperbelt residents to maintain the peace that the country has inherited from the forefathers since independence.
President Lungu advised those aspiring to lead to wait for 2021 and not destroy the country by their desire to rule.
And the President advised marketeers that obtained loans from the Presidential Marketeers Empowerment Fund (PMEF) to pay back so that others can benefit from the scheme.
He said the PMEF programme will soon be revamped but warned that those that have not paid back their initial loans risk being left out of the programme.
President Lungu said the PMEF was not a ploy to win votes but an initiative aimed at empowering the marketeers.
And President Lungu assured marketeers at Chisokone Market that he would send Minister of Local Government Vincent Mwale to get people’s views and concerns regarding the appointment of boards to manage markets and bus stations.
And Kitwe mayor Christopher Kang’ombe said the newly-constructed market shelter at Chisokone B has been named Edgar Chagwa Lungu shelter.
“You had left us with a task to rebuild the structure that collapsed on December 17, 2016 and you gave us K250,000. We also spent K771,000 for us to complete this shelter,” he said.
And National Marketeers Association of Zambia (NATMAZ) president Goodson Mofya said President Lungu’s commitment to constructing the new market shelter at Chiskone clearly demonstrates his love for the people in the informal sector.
The President was accompanied by Presidential Affairs Minister Freedom Sikazwe, Copperbelt Minister Bowman Lusambo, civic leaders and other heads of Government departments.