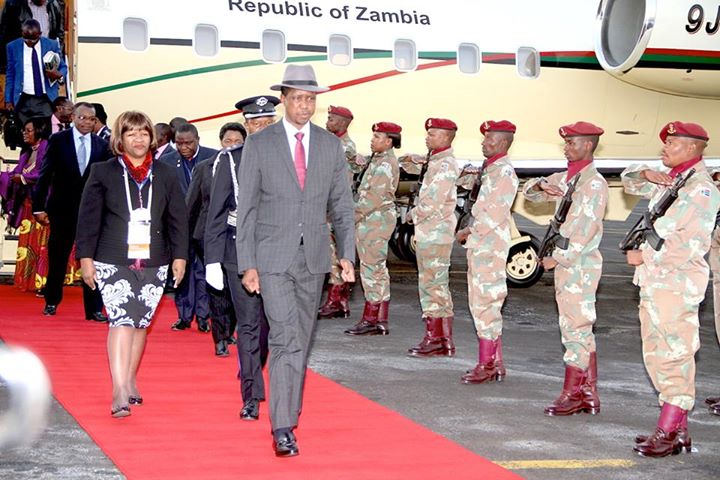 NANCY MWAPE, Johannesburg
PRESIDENT Lungu has arrived here for the African Union (AU) summit where he will deliver a keynote address on behalf of the Southern African region to a pre-summit meeting on the theme: â€˜Year of Womenâ€™s Empowerment and Development towards Africaâ€™s Agenda 2063â€™.
President Lungu arrived at Lanseria International Airport in Johannesburg at about 17:10 hours and was welcomed by Foreign Affairs Minister Harry Kalaba and senior South African and Zambian government officials.
And according to a statement issued by special assistant to the President for press and public relations Amos Chanda, President Lungu will address the pre-summit meeting today.
On Sunday, Mr Lungu will attend the AU Committee of Ten (C-10) countries tasked to spearhead Africaâ€™s lobby for the United Nations Security Council, KELVIN CHONGO reports from Lusaka.
First Lady Esther, who has accompanied the President, will attend the Organisation of African First Ladies against HIV/AIDS (OAFLA) on the margins of the AU summit.
And Mr Chanda said after the summit proceedings, the head of State will attend hospital for a scheduled medical review.
During the summit, President Lungu is expected to hold bilateral talks with his counterparts and representatives of international organisations, including the United Nations.
The summit will address, in closed session, topical and strategic issues as well as adopt the implementation of the first 10-year plan towards the `Agenda 2063 programme.
The African leaders will also discuss the streamlining of the AU summit and working methods, as well as procedures of the AU, with a view to having the organisation run more efficiently and effectively.
And speaking shortly before departure, President Lungu said he is happy that Zambians are now realising that investing in women produces tangible results in shaping the countryâ€™s destiny, JIMMY CHIBUYE reports.
Mr Lungu also said Zambia and Africa as a whole have woken up to the true reality that a woman is capable of shaping the destiny of a child, family and everybody else.
The President said this in an interview at Kenneth Kaunda International Airport (KKIA) shortly before departure for South Africa to attend the 25th Assembly of Heads of State and Government of the African Union (AU).
â€œI think we are happy as Zambians because people are realising that power lies in the woman at household, community and the republic and the nation as a whole,â€ he said.
President Lungu added: â€œSo we are trying our best as a country and as a region. I believe as Africa, we have all woken up to the true reality that a woman will shape the destiny of a child, family and everybody else.â€
He said Zambia should expect a lot from the summit because the focus is on the empowerment of girls and women.
Mr Lungu hopes the summit will culminate into fruitful discussions and the signing of bilateral agreements.
He said Zambia wants to maximise benefits from its presence at international meetings.