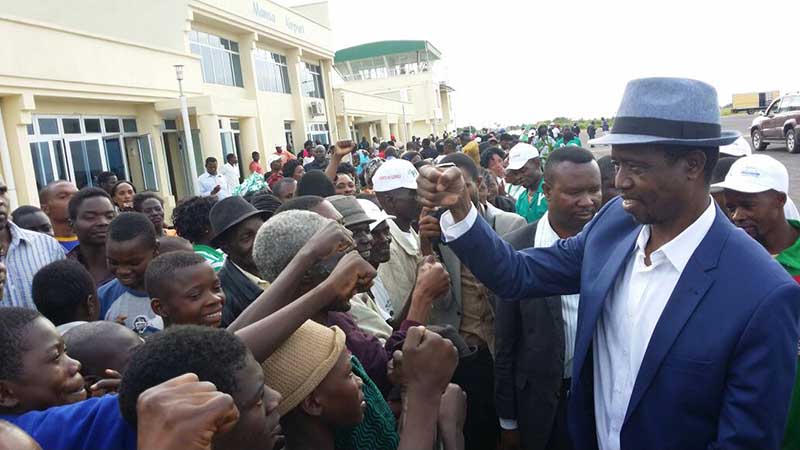 KAPALA CHISUNKA,Lusaka
Patriotic Front (PF) president Edgar Lungu has pledged to continue the development initiatives started by President Michael Sata in Luapula Province and the rest of the country.
Meanwhile, the Patriotic Front says its candidate Edgar Lungu is headed for a comfortable victory and is therefore surprised that the United Party for National Development (UPND) president Hakainde Hichilema has already declared himself winner of the January 20 election.
Mr Lungu said in Mwansabombwe yesterday where his Luapula Province campaign trail started from.
According to the PF meadia team, he expressed gratitude to the people of Luapula who gave the PF 13 of the 14 parliamentary seats in the 2011 elections.
Mr Lungu also praised the people of Mwansabombwe for welcoming him in large numbers despite heavy rains.
He said the development initiatives of universities, colleges, schools, roads, hospitals, and clinics should be allowed to be completed by voting for him.
Mr Lungu was accompanied by Minister of Foreign Affairs Harry Kalaba.
Later in the evening, Mr Lungu paid a courtesy call on Senior Chief Mwata Kazembe.
The Mwata welcomed Mr Lungu to the province and praised the internal democratic process that was used to pick Lungu.
He stated that although many felt that Lungu was a suitable successor left by President Sata, it was good that the party proceeded to open up the competition.
PF campaign spokesman Harry Kalaba said Mr Hichilemaâ€™s â€œwildâ€ claims could cause confusion at such a critical point and time.
â€œLet me be clear – the election will be held on January 20 on an open platform and not on radio chat shows where Mr Hichilema thinks elections are won. The PF wants to make it clear that it is focused on only one poll; the one poll that counts â€“ the January 20 poll,â€ Mr Kalaba said.
Mr Kalaba said in a statement yesterday that Mr Hichilema is basing his â€œhighly questionable popularityâ€ on some media houses opinion polls being conducted without any scientific verification.
He said the PF is relying on credible corporate and internal polls that are giving reasonable satisfaction for a comfortable win.
â€œAs facilitators of the elections, the PF will act with caution not to cause any panic that may undermine the electoral process. We urge Mr Hichilema to act responsibly as well so that we allow the people to express their free will in 10 daysâ€™ time,â€ Mr Kalaba said.
Mr Kalaba, who is minister of Foreign Affairs, urged Zambians to ignore Mr Hichilemaâ€™s empty claims and dismiss them with the contempt they deserve.