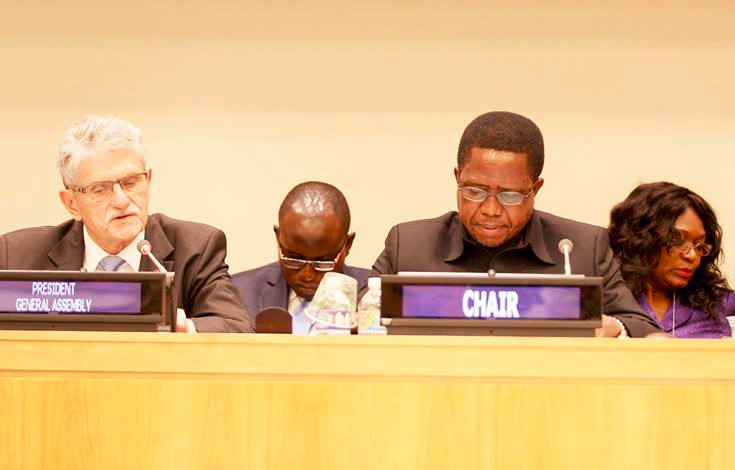 CHAPADONGO LUNGU, New York
PRESIDENT Lungu has called on the international community to promote growth, investment and sustainable development for land-locked developing countries (LLDCs).
Chairing a high-level forum for LLDCs hours after United States of America (USA) President Barack Obama officially opened the United Nations (UN) General Assembly here yesterday, Mr Lungu said LLDCs development needs to be reinforced.
President Lungu is chairperson of the LLDCs and won accolades for his leadership from all the countries that attended the forum themed: â€˜Linking land-locked developing countries to global opportunitiesâ€™.
The President said LLDCs have a historic opportunity to move forward with the Vienna Programme of Action and the recently adopted 2030 agenda for sustainable development and aligning national priority-setting, mobilisation of resources and the achievement of specific gains.
Mr Lungu said he understands that persistent development challenges facing LLDCs require an enhanced global partnership to embrace all key facets of achieving development.
The challenges, he said, are adequate provision and mobilisation of financing from all sources, domestic and international, public and private; the facilitation of fair and free trade; the development and transfer of reliable, affordable and modern technology on mutually agreed and beneficial terms; and capacity-building assistance, enabling institutional and policy environments at all levels, and continued and sustained international support to achieve internationally agreed goals.
The President said the Vienna Programme of Action for LLDCs represents a comprehensive plan of action to address special challenges and needs of the countries, which are all committed to its implementation.
â€œHowever, we need resources and partnerships, including with our neighbouring transit countries, development partners, international institutions, the private sector, academia, think-tanks and non-governmental organisations,â€ Mr Lungu said.
The 2014 Vienna Programme of Action pays particular attention to the development and expansion of efficient transit systems and transport development, enhancement of competitiveness, expansion of trade, structural transformation, regional co-operation and promotion of inclusive economic growth and sustainable development to reduce poverty, build resilience and transform LLDCs into land-linked countries.
Zambia hosted the ministerial meeting, which highlighted actions needed to accelerate the implementation of the Vienna Programme of Action.
President Lungu told the delegates, who included heads of State, that the meeting in Livingstone provided great momentum for the third international conference on financing for development that was held a month later in Ethiopia, which adopted the Addis Ababa Action Agenda, a promising political commitment for the achievement of sustainable development and eradication of poverty.
â€œIn order to achieve this, one of the priority areas is building and modernising infrastructure, both soft and physical, ranging from telecommunications, transport, energy, water and sanitation,â€ Mr Lungu said.
He said Zambia has prioritised infrastructure development in the national development plans and the national vision 2030 but has realised that the programme is expensive and cannot produce desired results if left to Government alone.
â€œTherefore, in narrowing the financing gap, Zambia has opened its doors to the private sector to participate in the construction, rehabilitation, maintenance and financing of public infrastructure under the public private partnership arrangements,â€ he said.
President Lungu said projects to be procured range from roads, railways, airports, border support facilities, energy, real estate and houses to agricultural and health services.
Another financing option being considered is contractor financing.
The President commended the role played by the United Nations Office of the High Representative for LLDCs and small island developing states and the United Nations system-wide organisations in supporting land-locked developing countries.
He urged the UN and international financial organisations to strengthen monitoring mechanisms and coordination in the implementation of the Vienna Programme of Action and develop transparent supervisory ways to follow up and measure progress.
He said as LLDCs link with global opportunities, there is need for value-addition to their products and to enhance the effectiveness of the value chain.
He said the southern African sub-region has prioritised industrialisation as a means of increasing higher value exports and a way of creating employment.
â€œStructural barriers and remoteness hinder land-locked developing countriesâ€™ access to global markets. Additionally, capacity constraints are a limitation for land-locked developing countriesâ€™ effective integration into the multi-lateral trading system,â€ he said.
He said another challenge affecting LLDCs is climate change, which remains a great threat to the economies.
Mr Lungu said global warming above 1.5 degrees will significantly increase the impact and damage from climate change.
â€œIt is my sincere hope that specific requests of land-locked developing countries will be considered during the United Nations Framework Convention on Climate Change in Paris this December,â€ Mr Lungu said
He also hoped for support towards the establishment of a fund for LLDCs.

Pray for peace ahead of general elections – clergy