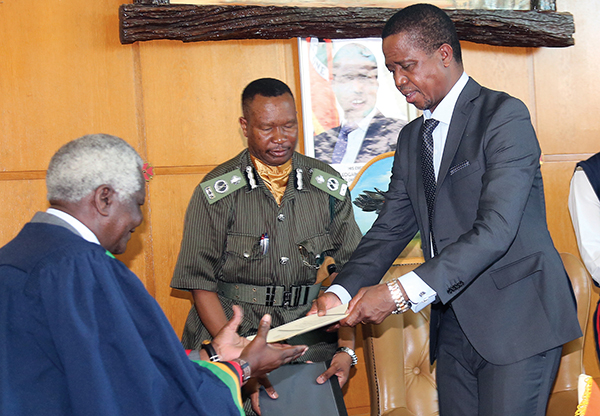 NANCY SIAME, Lusaka
PRESIDENT Lungu has appealed to chiefs to stop displacing their subjects by selling vast chunks of land to foreign investors.

And the President is dismayed by an increasing number of succession disputes some of which have resulted in some people getting killed in some chiefdoms.  He has warned that police will not hesitate to arrest any law-breakers.

Speaking when he opened the first meeting of the fifth House of Chiefs sitting, President Lungu said although chiefs are custodians of land, they should not abuse this role but preserve the God-given inheritance for their subjects.
The President said local people struggle to get land through local authorities and the Ministry of Lands and that their only hope of accessing the resource is through customary tenure.
“Our people face challenges when acquiring land, which is why Government in 2014 embarked on the land audit to compile a comprehensive, accurate and reliable database of all the land in Zambia,” he said.
President Lungu said the audit will enhance good governance, decentralisation and transparency in land, forestry and environmental management.
He said the coming land policy will also help improve land governance.
President Lungu is also dismayed by an increasing number of succession disputes in some chiefdoms and has appealed to the House of Chiefs to help find a lasting solution for the problem.
“We should not jeopardise our country’s impeccable record of peace and stability. Chiefdoms are the foundation of peace and tranquillity, hence the need to ensure their stability,” he said.
President Lungu said one of the ways to minimise the succession feuds is for chiefdoms to prepare indisputable family trees (lineages), which must be submitted to the Ministry of Chiefs and Traditional Affairs to help determine the rightful heir to a throne.
He said under the amended Constitution, Government no longer has jurisdiction to issue statutory instruments to recognise chiefs or withdraw their recognition.
President Lungu also tore at the Marriage Act, which establishes the age for marriage at 21 years but also allows younger people of the minimum age of 16 years to marry with the consent of parents.
He said Government is committed to addressing these gaps in the law to protect children from harm through the Gender Equity and Equality Bill, the Marriage Bill and the Child Code Bill, which have been developed.
The President also said Government is committed to uplifting the living standards of chiefs and their retainers.
Earlier, House of Chiefs chairperson Chief Ntambu said chiefs are expected to deliberate on a number of issues, including the proposal to abolish dowry (lobola) as most families have commercialised marriage using the customary practice.