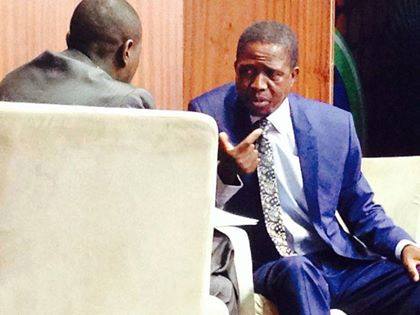 STEVEN MVULA & NANCY SIAME, Lusaka
PATRIOTIC Front (PF) president Edgar Lungu says the Public Order Act needs to be revised.
And Mr Lungu said that late President Sata had indicated to him that he could be his successor if he worked well enough for the people and got his programmes known.

He said this during an interview with Muvi Television on Tuesday night.
The Public Order Act provides that anyone holding a public gathering must notify the police two weeks before.
â€œWe have the decency to own up that the Public Order Act is not ok. It needs to be revised,â€ he said
Mr Lungu, who is also Minister of Justice and Minister ofÂ  Defence, said there is no government worldwide that is open to the Public Order Act.
He also disclosed that almost all the 100 nurses fired by the government close to a year ago have been reinstated.
Mr Lungu said the only thing that has remained for the nurses to return to work is to ensure that â€œall loose ends are legally tied upâ€.
â€œAlmost all the nurses have been re-engaged as I talk to you now and this issue is being discussed at the tri-annual conference that is going on in Livingstone,â€ he said.
And Mr Lungu said, â€œMr Sata said to me and my colleagues in Bemba that `go and work and get your works known, then you can succeed meâ€™.â€
Mr Lungu said he will finish the development projects started by President Sata, who died in London on October 28.
He said he will bring qualitative change to Zambian politics because he has been around for a long time.
Mr Lungu said he will make unusual changes such as reducing mealie-meal prices by ensuring that milling companies are opened in areas where there is high maize production.
â€œWe will make common grain like maize prices come down and thereby reduce the cost of living,â€ he said.
And Mr Lungu defended the PFâ€™s borrowing capacity saying that the countries and organisations lending money to Zambia know the country is able to pay back.
â€œThe people lending us money are not idiots. They evaluate our capacity. And this money is meant to develop this country,â€ Mr Lungu said