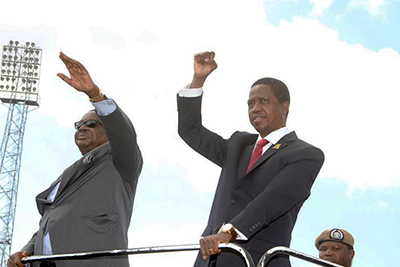 TEDDY KUYELA, Blantyre
PRESIDENT Lungu has called on Zambia and Malawi to continue working hard in pursuit of economic transformation to emancipate themselves from the shackles of poverty.
Mr Lungu said it is sad that while the two countries attained their political independence 50 years ago, Zambia and Malawi have not yet fully realised their economic liberation.
The Head of State said this in Blantyre at Kamuzu Stadium yesterday when he officiated at celebrations to mark 51 years of Malawiâ€™s independence.
The theme for the independence anniversary is: â€˜Towards Economic Transformation in Malawi for Inclusive Developmentâ€™.
President Lungu said: â€œOur ability to effectively attain long-term economic growth depends on how well we can effectively innovate and transform our economies and open upÂ  modern and higher technology opportunities in the production and export sectors.â€
He said Africaâ€™s future lies in diversifying its production and export base so that it becomes competitive on the international market.
â€œThis would enable our countries to create the much needed decent jobs for our growing population of educated youths,â€ Mr Lungu said.
President Lungu said economic transformation and diversification of Zambia and Malawi will contribute to their shared prosperity and improve the standards of living.
He said it is therefore imperative for the two countries to use their independence to fully harness and exploit the immense natural resources to improve livelihoods of the people.
Mr Lungu said political independence should also continue to inspire the people of Zambia and Malawi to work harder in their quest to eradicate hunger, poverty, joblessness and disease in their respective countries.
â€œZambia and Malawi are not only twins, but Siamese twins, born at the same time and shared distinct identical paths. We saw off colonialism, we endured the challenges of early nationhood, we returned our nations to democracy and we have both pursued economic transformation to emancipate our people,â€Â  he said.
Mr Lungu hopes that the two countries will continue to co-operate at bilateral, regional and continental levels in many areas.
â€œZambia and Malawi, having attained their golden jubilee last year, can now confidently say that both countries have remained united, strong and resolute in their determination to continue to afford nationals opportunities to enjoy freedom, democracy, justice, equality and personal liberties,â€ President Lungu said.
He also called on the people of Malawi to reflect on the great strides the country has made after attaining political independence in 1964.
Mr Lungu said Malawians should bear in mind that the freedom they are enjoying was borne out of great sacrifices and bloodshed by heroes and heroines who paid the price.
He said for this reason, fallen heroes should be honoured by not only safeguarding peace, but also embedding their names in history books.
The Head of State further urged the people of Malawi not to forget to pay tribute to countries and individuals who stood with them in the struggle for independence.
Mr Lungu thanked his Malawian counterpart, Professor Arthur Peter Mutharika, for inviting him to officiate at the national day.
And President Mutharika called on the people of Malawi to continue working hard to promote meaningful economic development.
Prof Mutharika urged the people to bury their political differences and focus on promoting programmes that will help create decent jobs and wealth for the country.
â€œIf we have to change this country, we have to start by changing ourselves. Let us work hard in promoting industrialisation so that we can create wealth and decent jobs for our people,â€ he observed.
President Lungu is accompanied by ministers of Foreign Affairs Harry Kalaba, Tourism and Art Jean Kapata, Eastern Province Malozo Sichone as well as First Lady Esther.