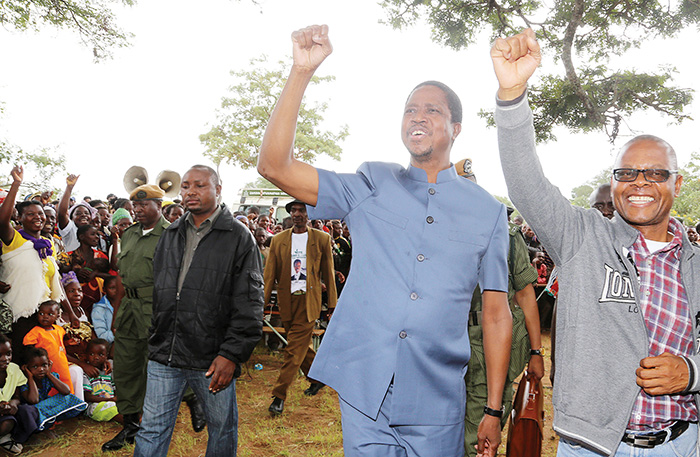 HONE SIAME, Kitwe
MINISTER of Transport and Communication Kapembwa Simbao says Zambia is in safe hands under President Lungu.
Mr Simbao, who is also Senga Hill member of Parliament, said in Kitwe that it is a blessing for Zambia to have Mr Lungu as President.
He said President Lungu is on the right path and that he needed support from all well-meaning Zambians as he continues leading the nation.
He said the country is assured of consistence in the implementation and formulation of policies aimed at meeting the aspirations of the citizens.
He cautioned Zambians against experimenting leadership and entrusting the presidency in individuals only interested in championing their business interests at the expense of serving the nation.
â€œLawyers have always made good presidents. It is good that our president is also a lawyer. If you look at countries like Germany and the United States of America, they have often been ruled by lawyers. It is not true that economists make good presidents.
â€œHistory has it that most of the economists are only interested in serving their business interests. We donâ€™t need such kind of leadership. President Mwanawasa was also a lawyer and he performed very well,â€ Mr Simbao said.
He said the economic challenges the country is facing are temporary and that Government will address them through various intervention measures it has instituted.
Meanwhile, Minister of Energy and Water Development Dora Siliya has advised opposition political parties to be realistic in their criticisms. She said people deserve the truth as opposed to blaming President Lungu and Government to win â€˜cheap political mileageâ€™.
Ms Siliya said in Kitwe on Wednesday that the current energy crisis, which has resulted in massive load shedding, should not be blamed on President Lungu and Government, but poor rainfall.
Meanwhile, ZUMANI KATASEFA in Luanshya reports that the PF in Roan constituency has hailed President Lungu and Minister of Agriculture Given Lubinda for quickly intervening in the price of mealie- meal.
Roan constituency chairman Nebati Matatiyo said yesterday that the move shows that President Lungu cares for Zambians.
â€œThe move that has been taken by President Lungu and the Minister of agriculture toÂ  intervene in the price of mealie- meal ,which is the staple food for many Zambians should be commended. We wish the President could do the same in these other essential foodstuffs,â€ Mr Matatiyo said.
Mr Matatiyo said some people have taken advantage of load shedding and the depreciation of the Kwacha against the dollar to unreasonably hike prices of essential goods and services.
He said it is unfortunate that some people have taken the liberalisation of the economy to hike prices of goods anyhow.
The price of mealie-meal and other essential commodities has doubled in the last two months.