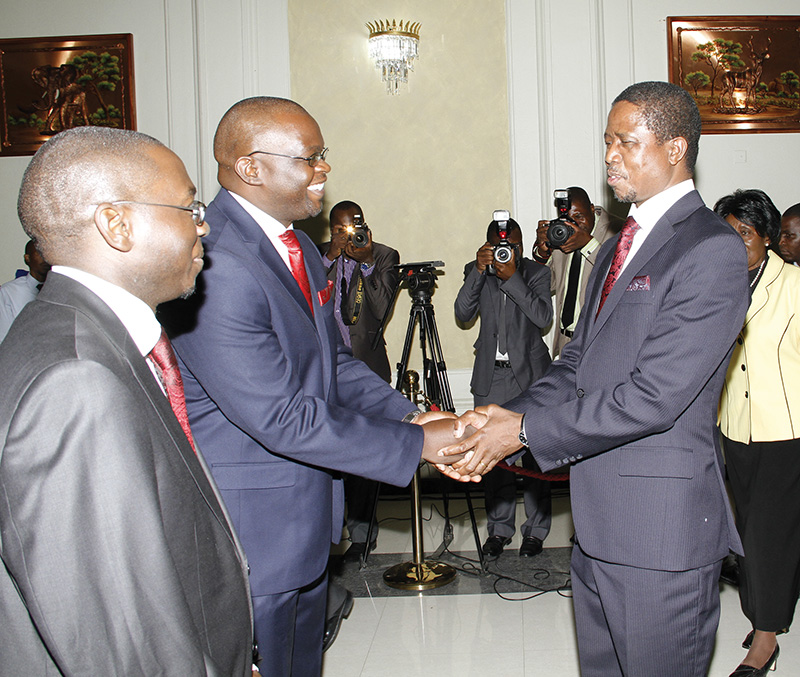 NANCY SIAME, Lusaka
PRESIDENT Lungu says he will continue appointing women and young people to decision-making positions.
Mr Lungu also said he will not restrict his appointments to people in the civil service because Zambia is bigger than the civil service.
He said this at State House yesterday when he swore in Mr Likando Kalaluka as Attorney-General and Mr Chalwe Lombe as Ministry of Foreign Affairs permanent secretary.
â€œI have no apology to make for appointing young people in high offices and these two deserve their appointments because they are qualified,â€ Mr Lungu said.
The President said he has so much confidence in Mr Kalaluka and Mr Lombe and that he has no doubt that they will deliver and prove critics wrong.
He urged those who have served long in the civil service and feel that they have been by-passed to work with Mr Kalaluka and Mr Lombe and help them deliver and settle in their new offices.
Mr Lungu said he will appoint more women and youths to high offices, adding that it is not wrong to be young and Zambian.
â€œLetâ€™s not underrate the young people because this is where probably our future lies. Same goes to the women. So help me by proving the critics wrong so that I can appoint more youths,â€ Mr Lungu said.
The President also said he will not restrict his appointments to the civil service but will extend this to individuals with different political party loyalties.
â€œZambia is bigger than the civil service and in my selection of people to work with, I will not restrict myself and I am sure you have seen that this is what I have been doing from the time I took over office,â€ Mr Lungu said.
He said Mr Kalalukaâ€™s appointment is on merit because he is a professional and the best man for the job.
He urged lawyers to support Mr Kalaluka in the course of his duties.
â€œWhatever criticism you received before your ratification was in good faith and you must not hold grudges,â€ Mr Lungu told Mr Kalaluka.
The President also urged Mr Kalaluka not to involve himself in partisan politics.
He also conferred Mr Kalaluka with the status of state counsel.
Mr Lungu also called on Mr Lombe to ensure that the revised foreign policy is implemented so that Zambians living in the diaspora can also enjoy some privileges.
And Mr Kalaluka told journalists he is happy with the appointment and thanked the President for entrusting him with such a task.
Mr Kalaluka promised not to let President Lungu and the people of Zambia down.
â€œI am a very competent lawyer, notwithstanding my age. I have the requisite experience required by the constitution to hold the office,â€ he said.
And Mr Lombe, who was director in charge of political affairs at the ministry of Foreign Affairs, said he will put God first in his work so that he can be directed.
The President later held a meeting with Mr Kalaluka, solicitor general Abraham Mwansa, Vice-President Inonge Wina and Minister of Justice Ngosa Simbyakula.
Meanwhile, President Lungu has appointed former Ministry of Foreign Affairs permanent secretary George Zulu as High Commissioner-designate to Australia.
Special assistant to the President for press and public relations Amos Chanda said in an interview yesterday that Zambia has opened a mission in Australia.
â€œMr Zulu, who was permanent secretary until yesterday (Tuesday), has been appointed as High Commissioner designate to Australia,â€ Mr Chanda said.
He said Mr Zulu has been tasked with theÂ  responsibility of completing all the formalities to open the new mission.
And Mr Zulu said he is happy to have created a position for a young man to take over.
He said older people must learn to retire and leave positions for young people to take over.
â€œI am very happy for the young man and my recommendations were good about him,â€ Mr Zulu said.
He said he is not new to the foreign service and will serve the country to the best of his ability.