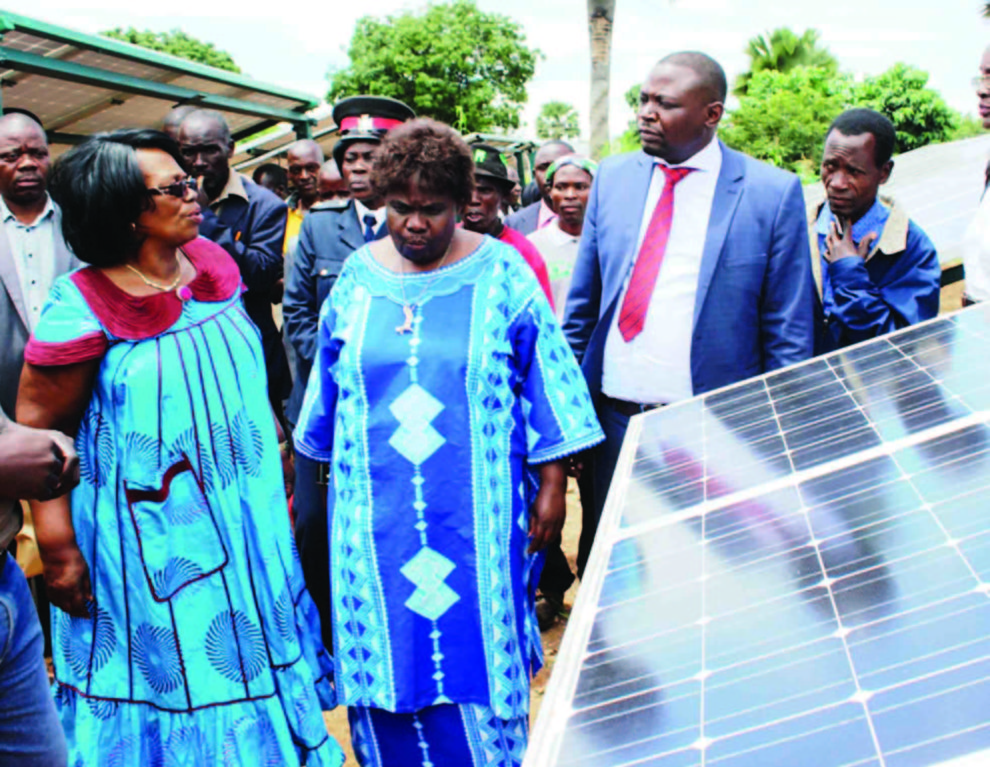 DARLINGTON MWENDABAI, Lundazi
AS PUPILS stamp their feet on the soils of Egichikeni, the women wriggle their waists; and Senior Chief Magodi’s face looks bright and from time to time, he smiles during the historic occasion.


The place is Egichikeni Primary School in Lundazi where Minister of Higher Education Nkandu Luo officially handed over a solar energy plant to the rural community in a project called phase one Lundazi Green Village.
Access to electricity for this rural community was considered a far-fetched dream until a US$1million Lundazi Green Village Solar Power Project (LGVP) was launched in 2013.
In numbers, the villagers gathered at the school to celebrate the installation of solar energy to 300 households, Egichikeni Clinic, Egichikeni Primary School, Chief Magodi’s palace and about 20 shops for small entrepreneurs.
The Lundazi Green Village project will provide electricity for lighting and use of electrical appliances through a stable solar-based power supply to both households and business enterprises.
This is the first time the rural community is being powered with energy about 52 years after Zambia gained independence.
Egichikeni village in Lundazi district is 750 km east of the capital Lusaka and 44 Km from the Lundazi central business district.
To the locals, the National Technology Business Centre (NTBC) renewable energy project launched at Egichikeni Primary School on March 24, 2017, is a blessing in many ways.
In their songs, the villagers stated that the project will not only give them access to power, but also guarantee them reliable supply and therefore improve their standards of living.
The aim of the project is to transform the rural community into a ‘green village’ through the use of renewable, clean energy.
As Chief Magodi was witnessing the launch, he was visibly happy and remarked that: “The benefits of the rural green electrification programme are immense”.
He said before the launch of solar power in his area, villagers were spending a lot of money on candles, while pupils had difficulties studying in the night.
The delivery of healthcare services without access to electricity was a challenge, but Chief Magodi was happy that things will now change for the better.
The chief thanked Government through NTBC who in collaboration with the Green Knowledge Institute and Zambia Environmental Management Agency (ZEMA) managed to bring the project which started in 2013 to fruition.
The Minister of Higher Education Professor Luo, who launched the project, said she was happy to drive 750 Km to Egichikeni village to celebrate the momentous occasion together with the local community.
Professor Luo said the mini solar grid will generate 48 kilowatts of power to Egichikeni community and surrounding areas.
She said solar energy supply will give the rural communities impetus to break out of the shackles of poverty and improve their standards of living.
Prof Luo said the project will also culminate into the installation of street lights in the communities, while the Egichikeni Clinic will be equipped with x-ray and ultra sound equipment.
In addition, she said the local community will be able to install irrigation equipment to facilitate off-season farming, while others will invest in food processing. At domestic level, the people of Egichikeni will be able to install water pumps for home use.
Installation of power in Egichikeni will further promote small entreprises at village level, thereby improving living standards of the poor.
The Lundazi Green Village project seeks to provide sufficient and stable supply of power to rural communities to enable them meet basic needs and also pave way for economic activities to thrive.
The project will also promote sustainable environmental management through the use of clean energy.
According to the project plan, as the demand for power grows, the capacity of the solar power system will be scaled-up to meet the needs of the community.
NTBC director Luwodzya Mwale said the project demonstrates commitment to supplementing Government efforts in taking alternative energy to the rural communities.
Mr Mwale said the green village concept can be implemented to any rural area in need of power.
According to NTBC, the project is in line with the Rural Electrification Authority’s (REA) plan of taking electricity to the rural areas in the quest to give the people access to basic social amenities such as water and communication services.
Zambia Environmental Management Agency (ZEMA) director John Msimuko said the agency contributed 85 percent to the total project fund.
Mr Msimuko said they supported the project under the interim environment fund.
“Provision of energy will, without doubt, reduce the negative impact on our natural resources and help to address issues of climate change,” he said.
He said the supply of clean energy to Egichikeni will have a positive impact on environmental management by reducing pollution through the use of wood fuel and fossil fuels for lighting purposes.
He said the use of green energy helps preserve the environment by way of mitigating global warming and consequently reducing climate change.
Mr Msimuko further said giving the rural community access to electricity will allow them to engage in business ventures, thereby reducing pressure on the exploitation of natural resources such as forests.
He said green solar power has the capacity to transform Chief Magodi’s chiefdom into a self-sufficient community.
And Chasefu member of Parliament Gerald Zimba was happy to witness the launch of solar energy in his constituency.
Mr Zimba said the project demonstrates that Government cares for the poor in a rural community which has been existence for about 100 years without access to electricity.
This explains the reason why the pupils were stamping their feet in joy; the women were dancing, and why Chief Magodi’s face was bright throughout the ceremony.

To stay or withdraw from ICC
Zimba transformational agenda on course