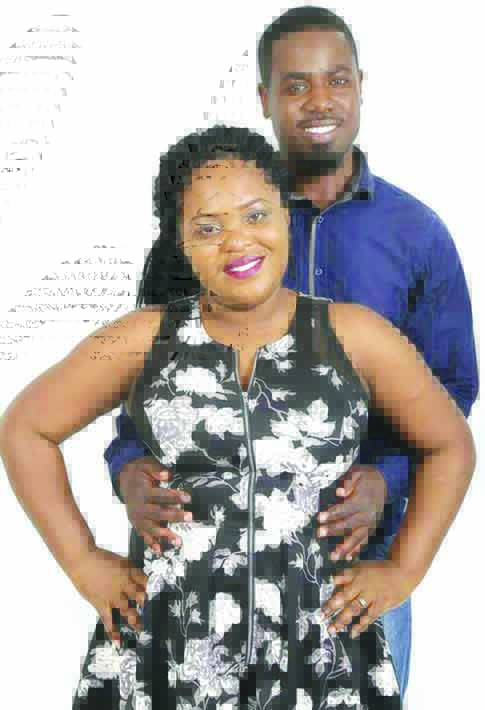 KELVIN MBEWE, Lusaka
THE story of Zambia National Broadcasting Corporation (ZNBC)’s reporter Patrick Mulenga and his wif e , Prexidence Chibale-Mulenga, a radiographer at the University Teaching Hospital (UTH), is a true reflection of Mark 10: 9: “What therefore God has joined together, let no man separate”.

The two met in Mansa seven years ago and have ended up together in Lusaka.
In a Cinderella-like story, they met when Patrick was working as a waiter at Prexidence’s uncle’s lodge.
According to Patrick, he was convinced that he had found his missing rib.
“I met her in 2010 at Teja Executive Lodge, in Mansa, where I was working as a waiter after completing my secondary education at Mansa High School. She was my boss’ niece and was also a school-leaver,” he said.
Despite falling for Prexidence, Patrick thought it wise to get to her using her cousin, only identified as Florence, who worked with him.
This was the beginning of what is today a couple of newly-weds, who seem deeply in love with each other.
“It was love at first sight, she looked so beautiful and natural when I first saw her. I saw a wife in her and not just a girlfriend who I can just have for a while. To me, she looked like a responsible and determined and not the common type of girls of nowadays who are into showing off and promiscuity,” he said.
Florence fixed a date for the two at a local basic school called Chakopo.
Patrick did not wait as he perceived this as his only opportunity to win Prexidence’s heart.
“I told her right there and then that I would love to be with her for the rest of my life. She did not take my proposal seriously and I assumed that it’s because she is from a well-to-do family. She became serious as time went by and I decided to take our relationship to another level by spending more time with her,” said Patrick.
In an eff o r t t o g u a r d Prexidence, Patrick says he started to feel jealous because she was accommodative to almost everyone.
“At first, it was difficult towards other people, she is too tolerant and this made me insecure at first but when I got to know her more, I realised that she was just a happy and open person,” said Patrick.
But Prexidence says her socialness is due to her background, where she grew up with a lot of people.
“I could joke around with anyone and was not selective. We talked about it and I adjusted because he was not comfortable with it because we are from different backgrounds,” said Prexidence.
Apart from Prexidence’s socialness, their relationship has had other challenges but the two have never separated to date.
Both Patrick and Prexidence applied at Evelyn Hone College, where they were accepted and they both moved to Lusaka.
It was at college when the couple decided to make it official.
“We started preparing in advance, as far back as 2013, and on May 27, 2017, we got married at Teja Executive Lodge, where we first met. Church service was at Mansa Cathedral and it was worth the wait,” said Patrick.
Prexidence recalls the best moment in their relationship as the day when Patrick went down on his knees and proposed.
“It was in 2012 and it felt so good because I did not see it coming,” she said.
She says her worst moment was when Patrick’s father died and he stopped talking and started missing class and this affected the relationship.
“I tried my best to be there for him but it took some time for him to accept the death of his father,” she said.
Meanwhile, Patrick describes his best moments in their relationship as when the couple both cleared their exams without any arears and the day when they both committed to each other.
He, however, says he does not remember any moment that he can describe as the worst.
Regardless of Patrick’s not-so-rich background, Prexidence’s family accepted him and vice-versa.
“I’m very close with both my in-laws. When we are together, we get along so well that my mother-in-law calls me son,” he says.
The two stay in Kabwata and are expecting their first child, with three more to come.

Plight of pupils at Lwabwe Primary School
What is causing divorces in Zambia?