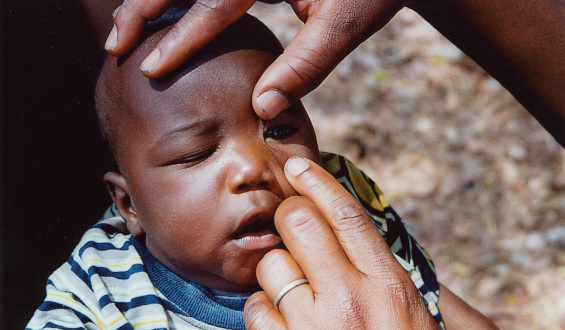 THE Ministry of Health and Sight Savers have launched a mass drug administration campaign in Livingstone to reduce the prevalence of trachoma, an eye disease.
Livingstone district commissioner Omar Munsanje said trachoma is the worldâ€™s leading cause of preventable blindness, and one of the neglected tropical diseases often affecting the poor.
Mr Munsanje said the prevalence rate of the condition in Livingstone district stands at 10 percent.
He said this in a speech read for him by Livingstone district administrative officer, Harriet Kawina during the launch of the campaign.
Mr Munsanje cited other contributing factors to the prevalence of the desease as overcrowding, poor hygiene and poor environmental standards, which allow the germ to thrive.
â€œThe Government with its partners, Sight Savers is conducting a mass drug administration in all affected districts, including Livingstone, in order to prevent the spread of trachoma,â€ he said.
Mr Munsanje said that mass drug administration for trachoma is â€œa very important exerciseâ€.
He said Government is committed to providing clean and safe water and improving sanitation to prevent the disease.
â€œThe drugs and the surgeries in this exercise shall be free of charge. It is, therefore, important that each family takes advantage of this free service, which will be conducted in all the catchment areas in Livingstone,â€ he said.
Trachoma is an infectious eye disease, which is spread by contact with an infected personâ€™s hands or clothes.
â€œI am happy to note that Government has through the Ministry of Health and the Ministry of Community Development trained 390 health workers and community volunteers to be deployed in 130 health posts to provide a service closer to the family,â€ he said.
Livingstone district medical officer Cliff Hara said the district will run trachoma prevention campaigns for the next three years using the SAFE strategy.
â€œS stands for surgery for those with triachisis, A stands for antibiotics, F stands for facial cleanliness and E stands for environmental cleanliness,â€ he said.
â€œThis calls for reinforced and continued multi-sectoral approach towards stopping the further spread of the disease,â€ Mr Hara said.