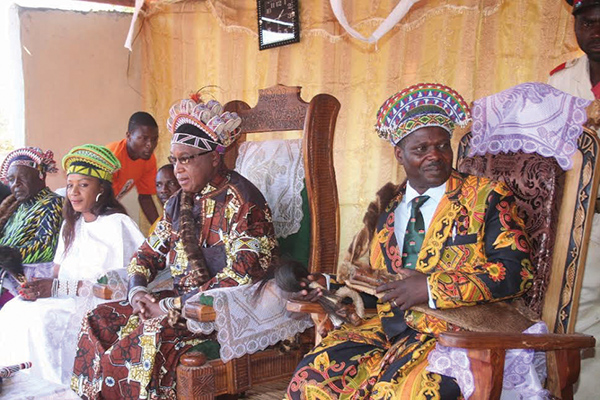 BUTTYSON KANDIMBA, Solwezi
KING Mwati Yamvwa of the Luba-Lunda Empire of the Democratic Republic of Congo (DRC) has called on all Zambian tribes to unite and live in harmony.
And Government has implored chiefs to continue attaching Christian values to their traditional ceremonies to promote peace and prosperity in the country.
King Mwatiyamvwa warned that if left unchecked, the recent tribal disputes in Zambia have potential to reverse the economic gains the country has made over the years.
He said all tribes in Zambia, including the Lunda and Luvale, are one people who must live together in harmony to promote peace and foster national development.
King Mwati Yamvwa was speaking on Saturday at this yearâ€™s Nkisu Ya Nzambi traditional ceremony of Senior Chief Musele in Solwezi.
â€œAll tribes in Zambia, Lunda or Luvale, are one people who must live as one family in harmony because our blood is one and issues of quarrels and conflicts retard development,â€ King Mwatiyamvwa said.
He said development is affected because everything comes to a standstill if there is a conflict between chiefs in an area.
King Mwati Yyamvwa also called on traditional leaders to co-operate with the government to expedite development, especially in rural areas.
The king also challenged parents to encourage girl-children to complete education instead of marrying them off.
He commended the Zambian government for promoting peace with neighbouring countries which has seen enhanced trade between Zambia and countries like the DRC.
King Mwati Yamvwa also thanked the Zambian government for allowing him to come to Zambia to meet his subjects.
The traditional leader said he has enjoyed the hospitality accorded to him from the time he arrived in the country.
And Senior Chief Musokantanda of Congo expressed concern about the boundary wrangles between chiefs in Zambia.
Chief Musokantanda advised Zambian chiefs to consult him whenever they have problems with their boundaries so that peace continues to prevail.
He also said King Mwatiyamvwa has stopped using the word â€˜empireâ€™ to refer to his kingdom and has adopted the word â€˜allianceâ€™ to unite all chiefs under his clan.
â€œThe issue of empire has been distorted in some way,â€ Chief Musokantanda said.
King Mwatiyamvwa was accompanied to Zambia by 15 chiefs from the DRC who came to witness the traditional ceremony.
And North-Western Province minister Dawson Kafwaya said modernisation and adoption of western culture has brought about moral decay in society.
â€œOur prayer is that other organising committees of traditional ceremonies would take a leaf and embrace such values, especially that Zambia is a Christian nation,â€ he said.
Mr Kafwaya said traditional ceremonies are important because they enable the young generation to assimilate, appreciate and embrace culture and tradition.
He said Government intends to revive cultural and traditional values that were attached to traditional ceremonies generations ago.
Mr Kafwaya called for joint partnership between Government and traditional leaders in order to enhance socio- economic development.
He said Government is determined to achieve broad-based economic growth, which will support decent job creation and reduce poverty.