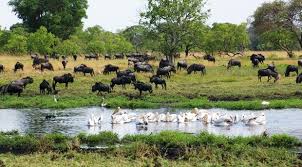 BENEDICT TEMBO
Mongu
DESPITE its remote location – in the northern part of Kalabo district in Western Province – the Liuwa Plain National Park has not escaped the attention of the international media.
The park has featured in a variety of travel and nature shows on channels such as ARTE, the European culture channel, and the BBC.
It has also been touted as a top nature destination in some of the world’s leading publications, including the New York Times and TIME Magazine.
“Liuwa Plain has attracted growing international interest as a result of its uniqueness, its transformatio and emergence as a top tourism destination,” said Sally Reece, the park’s projects manager.
Ms Reece said it is important to help build support for the park by raising its profile both in Zambia and abroad, and help to attract visitors in order to
promote the growth of eco-tourism. CLICK TO READ MORE