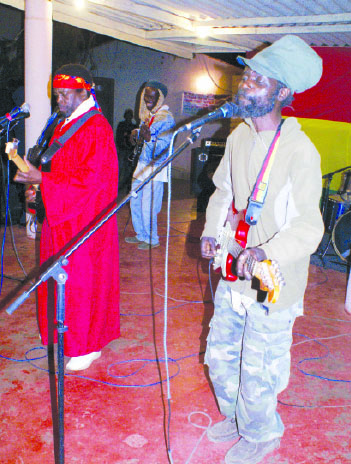 By KELVIN KACHINGWE
ALTHOUGH attendance was not as good as in the past, the 27th Peter Tosh Memorial show at Munda Wanga Botanic Gardens in Lusaka was able to go on last Saturday with reggae musicians playing on until around 06:00 hours the following day.
It is not clear why the attendance was particularly low as the line-up of musicians was basically the same as that which has performed in previous years.
The usual artistes such as Bantu Roots led by Khuzwayo Chisi, Crucial Lions, True Africans, Ras Anada and his Negus Tafari as well as some up-and-coming reggae musicians performed at the show which started around 18:00 hours.
There was also a member of Darai and the Mighty Circus of Germany by the name of Mike who performed with local singer Natalie under the name Diamond and Onion.
It is them and Ras Anada who led in playing Peter Toshâ€™s songs such as Legalise It and Get Up, Stand Up.
Legalise It!
While they performed Legalise It so admirably, it is not like they were promoting the use of marijuana. In fact, one thing that has been noticeable at recent reggae shows is the reduced use of dagga.
Unlike in the past when musicians and fans could abuse dagga at reggae shows with impunity, there is now very little of it that is visible at the shows.
But there is something about Toshâ€™s Legalise It.
When the former Wailers co-founder sat in a marijuana field smoking an ornate pipe on the cover of his solo debut album under the same title, he was not just striking a pose.
The Rasta rebel was making a bold statement directed at any and all governmental entities whose â€œwar on budâ€ he saw as nothing but a Babylonian brutality.
While most stateside stoners had never heard Toshâ€™s terms like â€œtampeeâ€ before, it did not take a genius to know what the Stepping Razor was talking about – ganja.
Considered a roots reggae classic, with its Rasta rhythms and rebellious vibe, the song remains still relevant three decades later although its vision statement has yet to be fulfilled.
And unless the Green Party forms government, it is unlikely to be fulfilled.