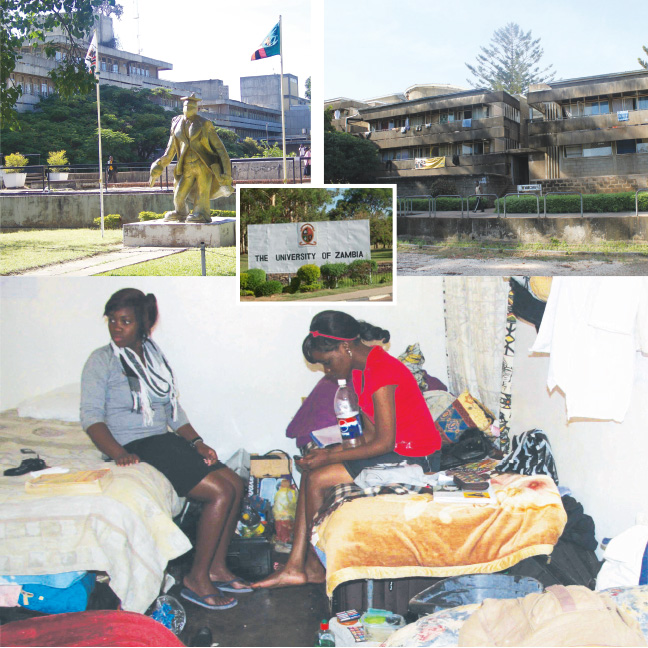 DOREEN NAWA, Lusaka
DESPITE being one of the countryâ€™s highest learning institutions, the University of Zambia (UNZA) leaves much to be desired as its infrastructure can no longer match the changes that have happened in the last 48 years since it was established.
Etambuyu Muyunda, a second-year student, feels the institution needs drastic infrastructural upgrading.
When Muyunda set foot at the campus, her picture of the institution was that of the University of Namibia (UNAM).
â€œMy sister did her tertiary education in Namibia and we used to visit her time and again, so I thought any African university looked like UNAM. But when I came here (UNZA), I was very sad and regretted that I had decided to do my school here in Zambia,â€ Muyunda says.
She says she worked hard and excelled in secondary school after which she came from Mongu to Lusaka for the first time in pursuit of a university degree.
To her shock, she found a crumbling university education system which sees over 200 students share a lecture room and many of them have no accommodation.
â€œIt may sound dramatic, but sadly this is the reality facing many Zambian students seeking to further their education,â€ Ms Muyunda says.
She describes her two-year stay at the campus as â€œdisturbingâ€ because she has to wake up very early for her to find sitting space in the lecture theatre.
â€œIf you come on time for a lecture, you will find all space taken; the best is an hour before class starts.â€
She says the living and teaching conditions at the nationâ€™s highest learning institution are â€œappallingâ€.
â€œIn many instances, the lecturer teaches over 200 students in one class without the PA [public address] system and the lecture rooms are too small for such a number. I believe they were meant for about 50 students,â€ she said.
UNZA was built in 1966 shortly after Independence to be a leader in the provision of higher education in the region and to produce professionally trained human resources for the new countryâ€™s growing economy.
However, the institutionâ€™s original goals are now under threat from overcrowding, falling staff levels and lack of investment in infrastructure.
A lecturer who sought anonymity said the learning infrastructure at the university is demotivating to the teaching staff.
â€œIt is demoralising and it also affects our performance as lecturers where you are teaching and you see students sitting on the floor and others are standing,â€ the UNZA lecturer said.
Other students talked to said most lecture rooms at the university are in a dilapidated state, many with leaking roofs, creating severe difficulties for students to learn during the rainy season.
â€œTake a moment and visit our libraries at every school like Education, the books are outdatedâ€¦there are leakages in almost every lecture theatre.
â€œIn the rainy season you will find that a student has to move from place to place during learning and that is inconveniencing. Itâ€™s a sorry sight,â€ says Kafula Makasa, a student in the school of education.
Besides the learning infrastructure, accommodation crisis has continued to be a thorny issue at UNZA.
In 2011, Government built new hostels, the Levy Mwanawasa hostels, to accommodate 240 students but this has proved to be a drop in the ocean.
Students say living in the hostels is like life in exile in their own country.
Apart from the new Levy Mwanawasa hostels, the old studentsâ€™ hostels are congested and in a state of disrepair.
More than 80percent of the students are not accommodated and in some cases, eight students share a room that is supposed to be occupied by two people.
In a male hostel called Africa the situation is unbearable. In a tiny room, there are four beds with three or four people sleeping on each bed.
UNZA currently has 3,736 bed spaces for a student population of full-time undergraduates of about 10,500.
Luckily, President Sata recently assured the nation that a project to construct in excess of 4,900 bed spaces would commence this year at UNZA.
And UNZA acting public relations manager Stanslous Chewe says the university is faced with a critical shortage of learning and teaching infrastructure because of the ever growing number of students each year.
â€œLike the current library built at the inception of the university to cater for just over a thousand students is today not able to meet the demand for reference resources by over 24,800 students.
â€œWe are hopeful that Government will soon fulfil its promise to build hostels,â€ Mr Chewe said.
World over, it is acknowledged that the universities are premier centres of excellence for research and training aimed at offering practical and workable answers to the challenges mankind faces.
As rightly observed by First President Kenneth Kaunda at his inaugural ceremony as UNZA Chancellor in 1966, a university is one of the keys that can open doors to the future and help overcome the persisting evils of poverty, ignorance and disease.
â€œWithout such an institution, we cannot hope to become the nation we want to be,â€ Dr Kaunda said.