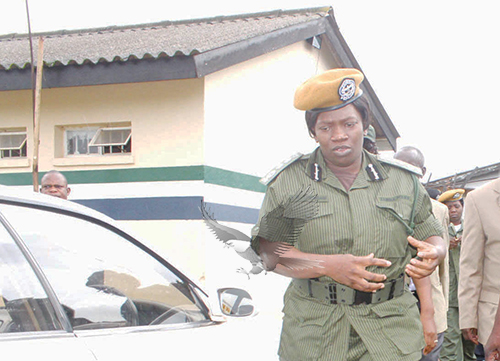 ALVIN CHIINGA, Lusaka
INSPECTOR General of Police Stella Libongani has advised politicians to desist from politicising the command through statements linking the police to politics.
Ms Libongani (right)said that politicians such as former Lubansenshi Member of Parliament (MP) Patrick Mucheleka and Forum for Democracy and Development president Edith Nawakwi should desist from making such statements.
Ms Libongani said in a statement yesterday that the main duties of the police include saving lives and protecting property in the interest of all citizens.
â€œI would like to state that police officers, individually and collectively as a department, are not politicians. Therefore, we will not tolerate people creating an impression that the Zambia Police is political,â€ Ms Libongani said.
She was reacting to the â€œwrong impression and unfounded statementâ€ published yesterday in The Post under a story headlined `Police officers, like everyone else, want political leadership change in 2016 â€“ Mucheleka.â€™
Ms Libongani said the mandate of the police is to ensure the provision of utmost security, which is critical at times such as elections.
â€œStatements like the one in The Post newspaper are an affront to our professional stance and, therefore, we would like to take this opportunity to remind our police officers to remain professional and not to be swayed in political biasness but to concentrate on fighting crime and lawlessness in the country,â€ she said.
She also advised the media to desist from publishing unconfirmed stories, which have potential to threaten Zambiaâ€™s security.