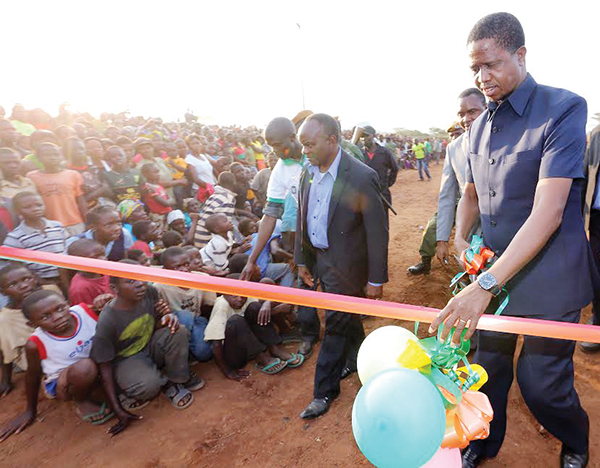 PRESIDENT Lunguâ€™s directive to the Ministry of Local Government and Housing to ensure proper use and administration of land could not have come at a better time than now when there are numerous disputes concerning the issue.
The country is beset by many land wrangles, which have caused displacements, unplanned settlements and, in certain cases, disease and death. It is an issue that is as emotive in urban areas as it is in rural areas because land is considered the ultimate asset by many.
The mushrooming of unplanned settlements across the country and untold consequences already suffered are evidence of poor administration and use of land. Such illegal settlements that councils eventually legalise pose a great danger to human life as they tend to harbour diseases due to unsanitary conditions they are usually in.
Without denigrating the great people in these unplanned settlements, it is an established fact that they are a source of criminal elements and social ills. Lusakaâ€™s Chibolya is a prototypical example of the danger unplanned settlements pose to development.
It is very difficult for local authorities to provide social amenities such as water and electricity, let alone deliver health and education services. The risk is that these townships end up without these facilities, which form the basis for human development.
That is precisely the reason President Lungu wants issues relating to land administered in a manner that will forestall such pitfalls. The President told new permanent secretary in the Ministry of Local Government and Housing Misheck Lungu to work closely with councils to end the wrangles and ensure land is administered in a manner posterity agrees with.
The permanent secretaryâ€™s plate is full at inception, given that majority, if not all, councils are embroiled in disputes. The President correctly referred to the issue as a scourge. We agree and add that the problem is chronic and will require drastic measures to correct.
That is because local authorities, which are in charge of land administration, are sometimes the culprits of this illegality. They are involved in duplicity. This means the permanent secretary will have to make some very tough decisions if these land wrangles were to be minimised or, better still, eliminated.
Apart from councils, political party cadres are involved in this blatant disregard of the law, invading other peopleâ€™s land and selling it for their personal gain. This has been going on for decades but we are glad President Lungu wants to bring an end to it.
For a country that seeks strict adherence to the law, it is imperative that the administration of land be done in a manner that will benefit all Zambians and that there should be consequences for those who break the law.
As the President said, we should go back to proper land use and planning so that we benefit to the maximum. A situation where a structure can be built anywhere as if we have no trained planners should come to an end.
A well-planned settlement benefits all while an illegal one affects everyone. Letâ€™s all do the right thing, which is to plan, administer and use land well.