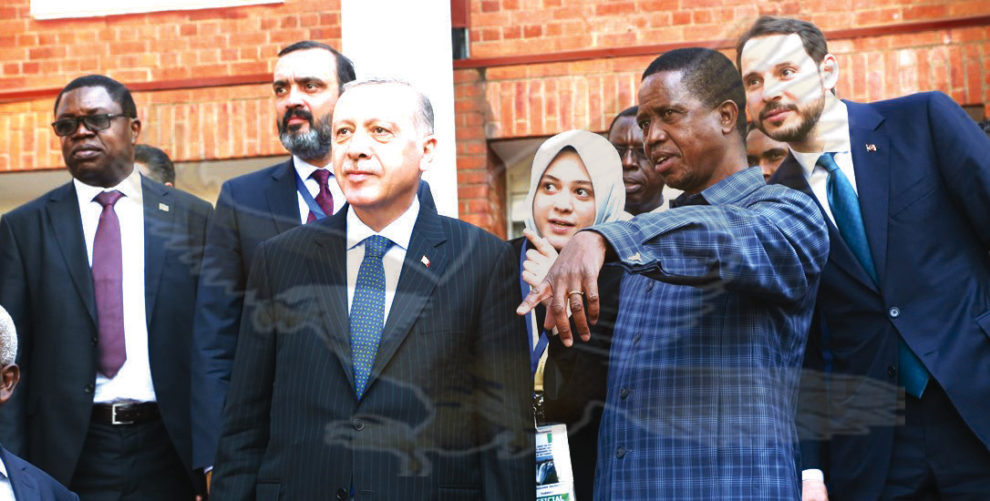 ZAMBIA is in a hurry to develop. To achieve this aspiration, the country needs the input of citizens and international players.While labour and raw materials are readily available, foreign direct investment (FDI) and machinery are also critical to drive the economy.
To develop, Zambia needs to use her natural resources endowment effectively and efficiently.
There is also need for optimal use of technology as envisaged in the Seventh National Development Plan.
To achieve this, the country should integrate with developed countries from which it should tap in terms of FDI, expertise and machinery.
Therefore, Turkey President Recep Tayyip Erdogan’s official visit to Zambia was a milestone because it will not only enhance bilateral relations between the two countries but will also lead to the integration of the economies.
The Turkish economy is growing and Zambia may play a significant role to enhance that, given the abundant raw materials in the country.
Turkey, with a population in excess of 80 million people, is dependent on oil imports – mainly from Russia.
The country needs to invest abroad – preferably in Africa – to generate returns back to Turkey. Zambia is equally strategically positioning itself to tap from the Turkish economy.
Zambia stands to benefit in this respect through Turkish investments in agriculture as they need some of our products.
Other agreements signed were collaborations in mining and forestry, radio and television, education, security and law enforcement from which both countries stand to benefit as they will exchange best practices.
Turkey will also invest in the aviation industry as Turkey Airlines will resume direct flights into Lusaka, increasing trade between the two countries.
There is now need to actualise the 12 agreements signed on Saturday.
The most important steps are when the ink has dried and documents begin to circulate within the ministries where they will need to be actioned.
Our expectation is that Zambia will hit the ground running in as far as implementing the memoranda of understanding with Turkey is concerned.
Procrastination is the reason the country tends to slow down in terms of implementing important agreements.
While procrastination is usually associated with perfectionism, it also has the potential to negatively affect outcomes.
Zambia has in recent years signed several agreements designed to address bottlenecks, especially when trading with other countries.
Recent agreements include a memoranda of understanding with South Africa in which at least 21 bilateral agreements were signed between the two sister republics in January last year.
Other agreements have been signed with Morocco and Saudi Arabia, among the several.
While agreements with countries such as Angola may delay because they have to be cleared by that country’s Parliament, nothing should hinder the implementation of the most recent deals with Rwanda and Turkey.
The agreement with Turkey is strategic because Zambia can also use that as an avenue for access to the greater European Union and the Middle East.
Focus should not just be on the economy but other sectors such as sport as the case was on Saturday.
The Ministry of Sport should disseminate the contents of the memorandum of understanding so that sports associations are aware and know how they stand to benefit.
We must implement the agreements as expeditiously as possible if our aspiration of being a middle-income country by 2030 is to be realised.
The platform has been laid and it’s now up to the technocrats to implement as the country’s economy continues on an upward trajectory.