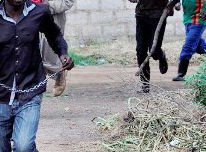 AS ZAMBIA draws closer to the general elections slated for August 11, cases of violence are seemingly escalating.
Violence is being committed through hate speech, ripping of rival political partiesâ€™ campaign posters and actual physical harm of rivals.
President Lungu has made it clear that opposition political parties will be allowed to campaign from anywhere â€“ thereby levelling the playing field.
President Lungu has also directed Police to deal firmly with people perpetrating violence irrespective of the political parties they belong to.
So, why is violence escalating?
One thing is clear, with time running out towards the D-Day, some political parties are getting desperate to make inroads. And when their campaign messages are seemingly not being well received by voters, they resort to violence of all manner, including hate speech and beating of rivals.
Hate speech and insults are being belted out at rallies and in some campaign songs without taking into consideration the feelings of individuals and the parties they are directed at.
This is certainly fuelling tension at a time Zambians should have been enjoying themselves as they listen to various messages in order to make informed decisions.
This could be traumatising for some voters.
Little wonder concerned citizens like Justice Lombe Chibesakunda are advising that Government establishes a fast-track court to deal with perpetrators of violence.
This fast-track court will ensure that perpetrators are speedily prosecuted and deter would-be offenders.
We expect leaders of political parties, especially the ruling Patriotic Front and the major opposition United Party for National Development, to set a tone for their supporters and denounce violence.
President Lungu has provided the desired leadership by condemning violence and instructing that perpetrators be arrested and prosecuted regardless of their political affiliation.
Unfortunately, some opposition political party leaders are falling far short of this wisdom even when they should be fully aware that supporters look up to their leaders for direction.
For instance, the United Party for National Development (UPND) has come to the defence of their members who were caught tearing down the Patriotic Frontâ€™s campaign posters.
The defence is that these cadres were merely putting up their own (UPND) posters. It is a wonder why posters should be mounted or pasted in the middle of the night while armed with an assortment of offensive weapons.
We appeal to youths who are being used to fan violence not to follow instructions of their political leaders blindly but should weigh the consequences of whatever action they are asked to take.
We expect politicians to focus on issue-based campaigns.
Political parties that have not fared well in sensitising their members on the referendum should concentrate on making their members understand what the referendum is all about as well as the contents of the Bill of Rights.
While it may not be feasible to establish a fast-track court in the remaining one month before the general elections, these courts can be used for future elections conflicts.
The existing courts should therefore heed President Lunguâ€™s call to expedite criminal cases of political nature to deter cadres from engaging in violence.
Though courts have a lot of cases to handle, priority should be given to cases of political violence.
Political violence could rob the country of its hard-earned reputation as a haven of peace. This should not be allowed.

Let us guard our peace

Commission on violence needs support of all

Thanks, calm has returned to Lusaka