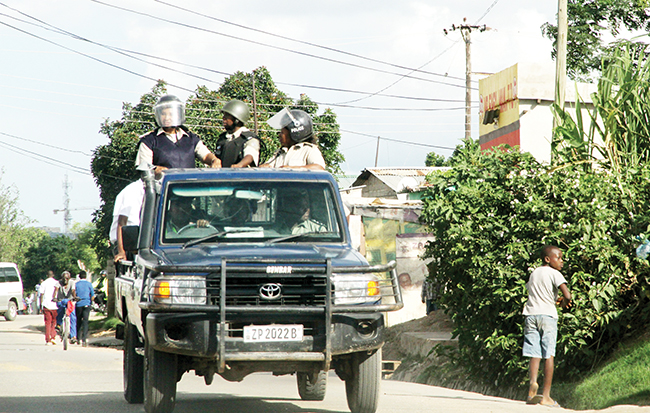 CHARLE CHISALA
THE August 11, 2016 general elections exerted unprecedented pressure on the Zambia Police Service as it battled to maintain law and order during the campaigns, the voting day and beyond.
One opposition political party had even before the campaigns kicked off earlier in May made its contempt for President Lungu and the government openly.
Even when the demographic realities of Zambian politics and public mood were clearly pointing to an outright Patriotic Front (PF) victory, the leader of this party had continued threatening not to accept a defeat.
As a result of his belligerent rhetoric and that of those who surrounded him, the cadres of his party were always ready to dare the police by breaking the law with impunity.
This defiant behaviour has continued after the elections.
Each time the law enforcers have moved in to restore order and apprehended some of the riotous cadres, their top leaders and their allies have screamed â€œpolice brutality!â€
Even small one-man â€˜brief-caseâ€™ parties led by political failures have climbed on hilltops to denounce the police, the President and the PF.
Innocent supporters have borne the consequences of brazenly daring the law while their leaders sip coffee in their ivory towers.
If this countryâ€™s police service had not been over-tolerant, professional and rational, many lives would have been lost.
Looking back at the pattern of violence and recent clashes between one opposition partyâ€™s cadres and police, it is clear that the worse is yet to come.
Before the December 15, 2016 clashes in Lusaka the leaders of this opposition party had been deceiving gullible members and supporters that the courts would nullify the election of President Lungu and swear in their leader as the new head of State.
The unsuspecting cadres were bused from the slums of Lusaka and rural districts to throng the Supreme Court/High Court grounds in the capital city.
They had not been told the truth, that the court was not sitting to nullify the results of the August 11, 2016 presidential election but to make a ruling on whether their leadersâ€™ presidential petition should be heard by the Constitutional Court or not.
So the cadres had arrived at the courts in high spirits anticipating the inauguration of their leader as the new republican president.
It was actually this misinformation that caused the trouble. That remains the stark truth, although the opposition party does not have the courage to admit it.
The cadres were baying for the matter to be heard in the open court because they were expecting the judge to announce the nullification and immediately crown their â€˜self-anointedâ€™ messiah as Zambiaâ€™s new president.
When they were, therefore, told that the case had been adjourned to a later date, they were not only shocked but also furious. They believed that they had been denied the jubilation they had anticipated.
The cadres expressed their disillusionment by confronting the police who were merely doing their job by stopping them from turning the court grounds into an arena for political mischief.
What followed is now water under the bridge, as they say.
But one thing has become clear; the opposition party has bigger plans to â€˜disableâ€™ President Lunguâ€™s government. The fiery and disrespectful rhetoric from its top and low-ranking leaders tells it all.
This party will never come to terms with the reality that six provinces and half of one out of the countryâ€™s 10 elected Mr Lungu to be the President of Zambia for five years.
One shudders to imagine what plans it may be secretly hatching right now should its endless crusade to unseat President Lungu and the PF through the courts hit a dead end. Have its tactics not become a pattern?
In short, the Zambia Police Service should brace for worse confrontations with the cadres of the opposition party.
It should be even more vigilant and its resolve ironclad.
Fortunately, the government has embarked on a robust modernisation of the service to equip it with modern policing tools and tactics.
And as part of this modernisation the Ministry of Home Affairs should seriously consider creating a commando unit in the Zambia Police Service.
This special rapid response crack squad could be trained by the One Commando Unit of the Zambia Army from Mushili in Ndola and embedded into the paramilitary battalion.
The squad should be equipped with state-of-the-art armoured vehicles, electronic gear, high-calibre and precision assault weapons, body armour and other anti-terrorism paraphernalia.
All modern police services the world over have such special forces to quickly respond to national security threats.
Nothing should be taken for granted.
This is a special homework for the Minister of Home Affairs, Honourable Stephen Kampyongo, and his permanent secretaries.
It could be one of the key proposals in the national budget for 2018.
The author is acting Zambia Daily Mail news editor.