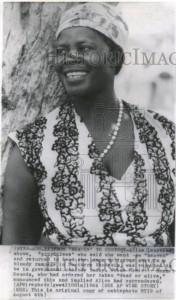 JACK ZIMBA, Chinsali
SHE has been vilified in many historical accounts, but to her followers, Alice Lenshina is still revered as the prophetess of God, and no more so than in Kasomo Village, in Chinsali district, which was the focal point of her spiritual influence.
And now her followers want her burial place to be declared a national heritage site.
According to Martha Mumbi, who oversees Lenshinaâ€™s mausoleum, the the church wrote to President Lungu in October last year requesting that the burial place be declared a national heritage site.
Lenshina died in December 1978.
Her mausoleum is a doorless concrete cubical about two metres high and three metres in length, standing beside the pulpit she used to preach from when she led the church.
The mausoleum is kept in pristine condition by the followers, and attracts many visitors, including researchers and historians from abroad.
Apart from the mausoleum, there is also the shrine where Lenshina is said to have been going to receive messages from God, just like Moses in the Bible.
In fact, Lenshina is held in the same light as the biblical Moses.
Kusensela Ngandu, who is senior archbishop of the Jerusalem Church (it was previously known as Lumpa African Church), said Lenshina was unfairly treated by the United National Independence Party (UNIP) government.
The UNIP government quashed what was known as the Lumpa uprising in a bloody military operation.
Mr Ngandu, 80, now wants former President Kenneth Kaunda, who ordered a stop to Lenshinaâ€™s activities, destroying her temple, to apologise.
He said Dr Kaunda must apologise by rebuilding the temple.
He denies Lenshina and her followers were involved in any wrong activities such as members being forced to drink urine.
â€œIt was propaganda by the UNIP government to make Lenshina look bad,â€ he said.
He speaks highly of the spiritual leader.
â€œMama Lenshina used to lead us in the same way that Moses used to lead the children of Israel. She also used to go to the temple where she would receive messages from God,â€ he explains.
â€œWhen mama Lenshina came, she stopped all evil acts. There was no insulting, no smoking, no drinking beer or marrying many wives,â€ he says.
When Lenshina died, Mr Ngandu was one of those who carried her body and placed it in the final resting place.
The followers in Kasono village now number about 300. Each morning, the members gather at a spot near Lenshinaâ€™s burial place to pray.