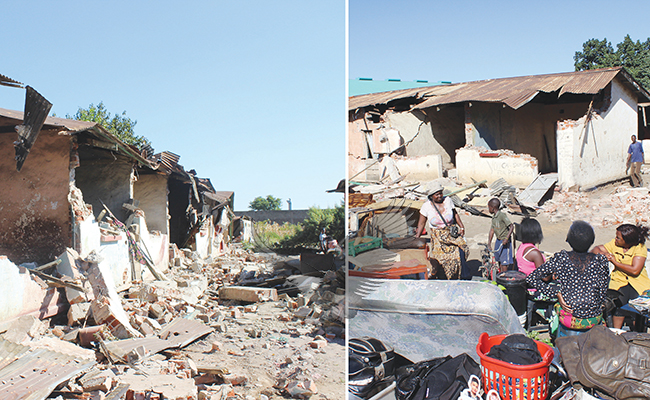 JIMMY CHIBUYE, Lusaka
THE Lusaka City Council (LCC) has instituted investigations to establish circumstances under which Tesno General Dealers obtained a title deed it used to execute a court order to demolish houses in Lusakaâ€™s Chinika light industrial area, leaving 32 families homeless.
On Wednesday, Tesno General Dealers, a Lusaka-based company claiming ownership of the land, executed a court order to remove the occupants from the land situated at stand number 12923 and demolished their houses.
The demolition was conducted by a team of the Sheriff of Zambia and police.
But council acting public relations manager Habeenzu Mulunda said in a statement on Thursday that a search conducted by the local authority has revealed that Tesno General Dealers sued the tenants and did not include the commissioner of lands and the local authority.
Mr Mulunda also said the search has revealed that Tesno sued the tenants based on a certificate of title, which was purportedly issued by the commissioner of lands in 2011.
The matter is currently on appeal in the Supreme Court.
â€œTo this case, neither the council nor the commissioner of lands was sued by the plaintiff.
â€œTherefore, based on this revelation,Â  LCC, through the legal department, is now trying to establish the circumstances under which the said title deed was obtained, and that the council will join the court case in the Supreme Court,â€ he said.
Mr Mulunda has also clarified that LCC was not involved in the demolition.
He also said on Saturday last week, LCC demolished four boundary walls, a flat and a guardhouse in Woodlands.
Mr Mulunda said the structures were destroyed because they were illegally developed on a private land and had no approved plans.
â€œThe due process of demolition in accordance with the Town and Country Planning Act Chapter 283 was followed,â€ he said.
Mr Mulunda said the demolitions were necessitated after the expiration of the 28-day grace period under which the developers were supposed to appeal against the enforcement notices for destroying of their structures.