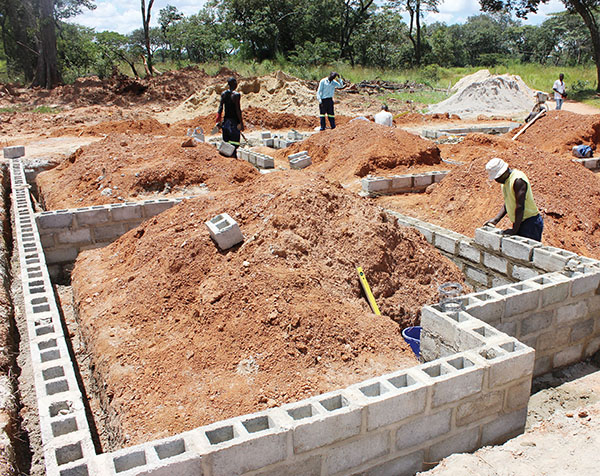 GOVERNMENT has started constructing housing units, a Post Office and district administrative offices in Lufwanyama. Above, the people engaged to work on the housing units on site. PICTURE: NKOMBO KACHEMBA

KELLY NJOMBO, Lusaka
THE Local Authorities Superannuation Fund (LASF) requires over K18 million to construct 36 houses in Lusakaâ€™s Chainama residential area, as a way to raise funds to enable them pay arrears owed to retirees.
LASF owes about K292 million to 3,000 retirees, as at April 2015.
LASF director of finance and pensions administration George Chileshe said K18.72 million is the total amount needed to complete the construction of 36 houses.
Mr Chileshe said this on Friday when National Housing Authority (NHA) handed over the initial six houses under phase one at a cost of K3.5 million.
â€œWe contracted NHA to construct six houses for LASF in the first phase, and now we are remaining with 30 more. We decided to invest in the real estate sector as a way to raise funds, and to increase our investment portfolio in the long-term,â€ he said.
Mr Chileshe said LASF will start constructing the remaining 30 houses according to the mobilisation of funds and after Government reforms the pension regulation to enable the authority become financially sustainable in the long term.
Mr Chileshe also said the project will help bridge the housing deficit in the country, which currently stands at about three million.
â€œWe are still waiting for Government to reform the Pensions industryâ€¦Once this is done, institutions will be restructured and this will help clear the arrears owed to retirees who have been waiting for their money for a long time now,â€ he said.
Mr Chileshe said LASF is also in discussions with Solwezi and Chinsali municipal councils to construct houses in the districts.
He also said land has already been allocated for the two projects.
The construction of houses in the two areas will increase access to decent accommodation among the poor population.