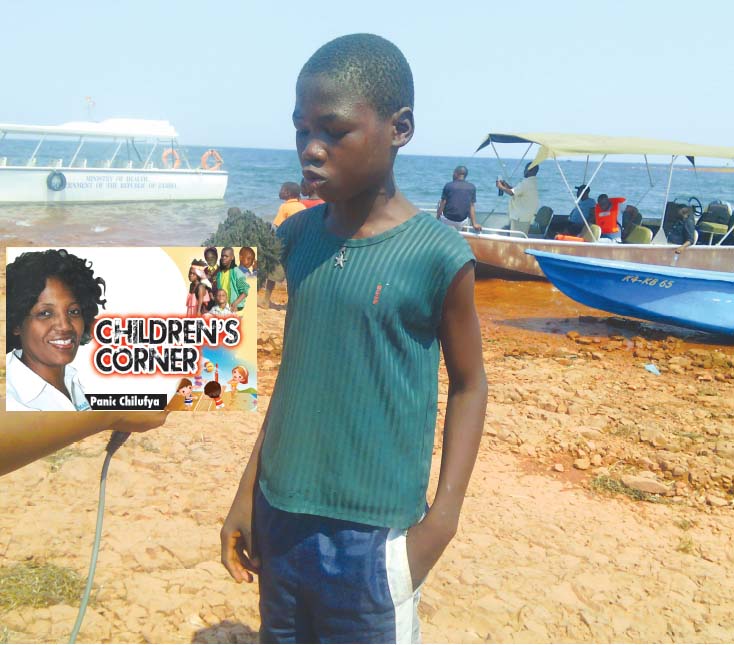 CHILDREN’S CORNER with PANIC CHILUFYA
TODAY a sombre mood has gripped the whole nation as we bury the 25 victims; majority of them pupils from Henga Primary School in Gwembe, Southern Province, who drowned on Lake Kariba last Friday.
What should have been the climax to a memorable and joyful day on Friday, October 24, as we were celebrating the Golden Jubilee; the nation was shaken with news that a banana boat meant for 14 passengers but carrying 34 had capsized in the crocodile-infested lake and most occupants had drowned. One young survivor out of the eight managed to swim to shore and alerted police about the tragedy.
With the hype and excitement about the Golden Jubilee, the pupils and their teachers were obviously excited to be among those chosen to commemorate what promised to be a historic day with others across the lake where celebrations were supposed to take place. Hence the decision to use a boat; water transport is the preferred mode of transport as it is the quickest way to getÂ  to Chipepo harbour because Henga Primary School is on the eastern part of the district on the lake shores.
Unfortunately, according to a police source at Gwembe Police Station, strong winds on the lake caused the accident but what cannot be denied is that the boat was seriously overloaded and could not withstand the bad elements on the lake leading to these unfortunate deaths.
I do not know what criterion was used to pick the pupils to attend the celebrations but in my personal opinion, these young souls who lost their lives in such a horrific manner must have been outstanding members of their school to be accorded the honour of travelling across the lake to take part in the celebrations. Therefore, their deaths are not only a loss to their families and community but the country as a whole. These are lives that had promising futures that were cut short in such a heart-breaking manner.
As Minister of Gender and Child Development Inonge Wina said in her message of condolences to the families, we all have the responsibility to protect children under our care from all harm, at all times. The Convention on the Rights of the Child states that a child has the right to survive including the right to life. A child also has the right to be protected against abuse and neglect by parents and other caregivers or adults in general. She hoped that in future childrenâ€™s welfare is safeguarded not only in the home, school, church and but also during their travel away from home during such occasions.
This is not the time to apportion blame as to who is responsible for this tragedy because we are all in a state of shock and mourning; it is my hope that this terrible accident will serve as a wake-up call for those responsible for children especially when going on various trips which have become the norm these days. I sometimes shudder when I see how pupils; some young pre-schoolers who do not know any better are subjected to unsafe travelling conditions and are oblivious to the dangers they are exposed to in case of an accident on our overcrowded and sometimes perilous roads.
I recall how one mother expressed her disappointment and anger because of the manner her four-year-old daughter and her little classmates on a school trip were made to travel on a bus that was not roadworthy and did not have any seat belts to rein in the young passengers. God forbid if the unthinkable had happened. It would have been another terrible tragedy of untold magnitude.
Similarly, if the ill-fated boat had not been overloaded and if all the passengers had been wearing life jackets, which is supposed to be mandatory when using any form of water transport; as seat belts are a must when travelling in a vehicle, many more lives would have been saved.
It is my hope that the ministries concerned, especially the Ministry of Education, will come up with stringent and laid down measures that schools and other institutions involved in transporting children should adhere to without any compromise. Otherwise we shall continue losing our children in situations that can be easily avoided.
As our dearly beloved are being laid to rest today in a mass grave in Gwembe,Â  I can only pray for Godâ€™s comfort and peace upon the bereaved families as they try to come to terms with their terrible loss; words can never be enough to ease their sense of loss. I would further like to commend Government and all those who assisted in making the burden lighter by ensuring that all victims were retrieved from Lake Kariba within the shortest possible time and funeral arrangements were taken care of. And to acting President Edgar Lungu for declaring today a day of national mourning as we all stand in solidarity with the families and people of Henga during their darkest hour.
Remember, children are our future. Until next week, you take care.
pchilufya@daily-mail.co.zm or gender@daily-mail.co.zm