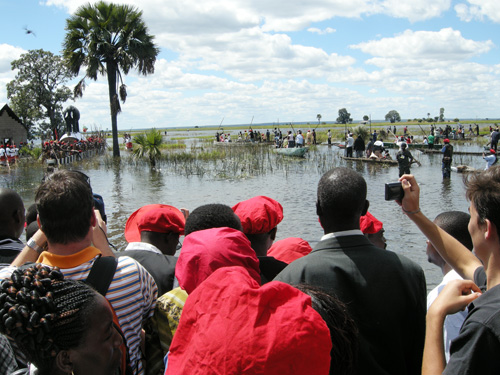 ELIZABETH CHATUVELA, Mongu
THE 2017 Kuomboka traditional ceremony of the Lozi-speaking people of Western Province has been set for April 8, 2017.
And the Barotse Royal Establishment (BRE) has warned politicians against politicising the event.
BRE acting Ngambela [Prime Minister] Nyambe Mwenda announced the date of the ceremony in a recorded message aired on Oblate Radio Liseli on Monday evening.
Nyambe Mwenda, who is also Induna Mukulwakashiko, said the announcement allayed doubts by some people on the holding of the ceremony this year.
Mr Mukulwakashiko said BRE had invited President Lungu to the event.
â€œThe traditional authority needed to put things in place such as observing the right time and working on all the boats before announcing the date,â€ he said.
Induna Mukulwakashiko said that the new royal badge, the Nalikwanda, would be paddled by 180 paddlers drawn from the Christian community and various political parties, among others.
He also appealed to spectators to observe the Lozi traditions during this yearâ€™s ceremony.
Induna Mukulwakashiko said the event should be free of politics, and that political party regalia would not be allowed.
Meanwhile, Litunga Lubosi Imwiko II last week moved to his summer palace in Lealui in readiness for kufuluela [coming out of water].
The procession from Limulunga (winter palace) to Lealui lasted almost three hours amid tight security.
The Kuomboka traditional ceremony was last held in 2013.